First up, three studio portraits of guys in the U.S. Navy.  First up is my old friend Joe Trembula, then my brother Scott, and finally me.  I have no memory of that photo being taken, but it must have been in boot camp – at no other point in my Navy career would anyone have even proposed such a thing. :)  I'm actually rather impressed with the quality of these, except for the color fidelity on Scott's.  Mine and Joe's would have been taken in '71, Scott's likely a couple years later.  Joe's captures his intense visage very well; it's exactly as I remember him looking nearly all the time.  Scott, just as you'd expect, looks completely unreasonably happy given the circumstances. 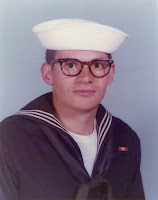 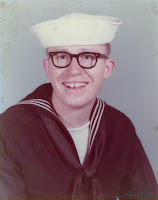 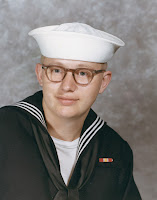 And here's another boot camp photo, this time Army, though.  On the back, in my mom's handwriting: “Bernice ‘90”.  I assume that means Bernice Dill, my brother Mark's good friend – who must have been in boot camp in 1990.  I'm struck by how much more serious and, well, threatening he looks than we three sailors.  If I was a bad guy, I'd be much more concerned about Bernice than those sailor clowns! :)

This photo brought back all sorts of pleasant memories for me!  On the back, in feminine printing that I don't recognize:

Tina was my sister Holly's girlfriend the last few years I lived in my parents' home, late '60s and early '70s.  She was a very sweet young thing at that time, and the subject of, er, less than pure thoughts on my part. :)  I don't believe I've seen Tina since then, but I still recognize her in that photo.  I'm guessing that Joe is her husband, Rita, Clara, Jeremy, and Amanda her children, and Paul her grandchild.  My sister can verify that for me, I'm sure.

Then there's this portrait of me, another undated studio portrait that I don't remember.  This one is printed beautifully on quality photo paper.  From my apparent age, I'd guess this was taken in '57 or '58.

And finally, here's today's mystery photo.  The lab dates this as December 1959, earlier than most of my parent's color photos.  On the back, in my mom's handwriting (in fountain pen): “Bearberry”  This is the kind of photo my dad might take, though there's no indication that he did.  Generally his early color photos were all on Ektachrome slides; this is printed from a Kodacolor negative – so I'm not at all sure this was taken by my dad.  What makes this slightly odder than it otherwise might be is that this photo was in an envelope that otherwise contained only photos of me and my siblings.  It could simply be a mistake, but I'm wondering if this photo had some special meaning for my mom...
Posted by Unknown at (permalink) 8:23 AM