Paradise ponders...  My lovely bride has a birthday today – not a particularly happy one, due to her knee issues.  I gave her an “unhappy birthday” kiss, which got a smile...

I've now washed three loads in our new dishwasher, all with outstanding results.  One thing that's particularly notable as compared with the one I just removed: we're not seeing any spotting or filming on our glassware.  Since I don't know what causes those things in the first place, I haven't a clue why they're not appearing now – but I'm sure happy they're not!  I'm learning how to load it, which is quite a bit different than any other dishwasher we've owned.  The silverware drawer makes that stuff ridiculously easy.  The glassware, I'm discovering, can be closer together than with our previous machine – they don't seem to be jostled around as much.  The bottom rack, for the big stuff, I haven't really challenged yet – but purely subjectively, it appears to be 25% or so larger than our previous machine – mainly because there aren't many projections from the sides that restrict where you can put something.  The many foldable and movable supports are really handy-looking, but I haven't needed them yet.  I haven't yet found anything to complain about – I'm sure I will, eventually, but not yet. :)

Yesterday I took Cabo and Mako to the groomer for the first time.  They both looked unworried, so I just left them in the groomer's care, and came back a few hours later to pick them up.  The groomers were a hoot when I came back.  They were fawning over both puppies.  Talisa, the same groomer who fixed Miki up for us on Friday, was all over Mako (whom she groomed), calling him “cutest puppy evah!” and saying that “we’d converted her to field spaniels”.  The puppies got a haircut, nail trim, and teeth brushed, and the groomers reported them to be perfectly well-behaved the whole time they were being worked on.  Mako, especially, got high marks for his calm and unworried behavior.  Cabo was reported to be a bit of a drama queen, but not nearly as hard to handle as many puppies are on their first trip to the groomer.  When I had them both on-leash and was getting ready to leave the store, all five groomers then on duty came out to say goodbye to the puppies – who were eating up all the attention.  That was about as good a grooming experience as I could imagine. :) 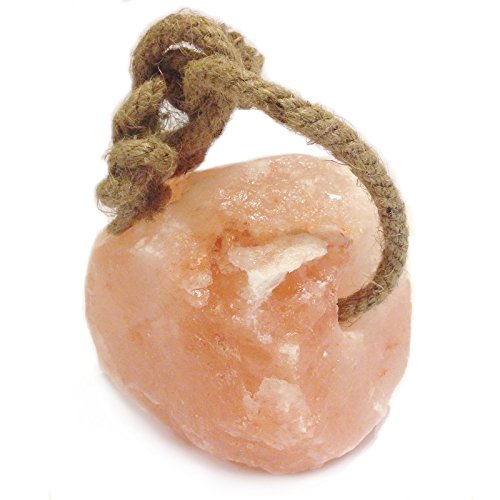 On my way back home from dropping off the puppies, I stopped at our local Tractor Supply Company outlet to pick up a water bucket.  Why?  Because our darling puppies totally destroyed the thick plastic bucket that I had in their kennel. :)  The new one, which I found easily there, is made of thick galvanized steel.  This is, I think, beyond even the demolition talents of those puppies.  While there I spotted something interesting: salt on a rope.  This is a solid block of naturally-occurring salt, cut out and drilled for a rope.  We've been intending to put up a salt lick for wildlife (deer, elk, moose) in our front yard, and this was about as perfect as we could get.  I got one, and now it's hanging from one of our pine tree limbs in the front year.  As soon as I see evidence of its use, I'm going to put up the trail camera and see if I can capture some photos.

I also stopped at Macey's, our main grocery store.  I had a shopping list with six items on it, but I ended up with nearly a full shopping cart. :)  While wandering the aisles, I happened past an Asian woman who works there, someone I'd asked for help several times and who was always very nice (and helpful!).  She's very short, maybe 4-2 or so, and was on the fourth step of a little step ladder restocking a shelf.  She dropped a box of cereal just as I was walking by, so I picked it up and handed it back up to her.  That got me a radiant smile, and I went on with my shopping.  A bit later, she came by me in a different aisle, pushing her cart full of items to be restocked.  She stopped and told me (in quite broken English) that one of her favorite things about living here was just how kind and considerate everyone was.  “So different than home!” she said, which of course made me ask where home was.  Vietnam, she said, not far from Hanoi.  She looks like she's perhaps 45 years old, so she'd have no memories of the war.  We had a short conversation, in which I learned that she moved directly to here from Vietnam about five years ago, on the advice of a relative who was attending Utah State University here.  She'd been struggling to make her way in Vietnam, and really didn't like it there.  Being here, she said, has been simply wonderful for her – she said “I didn’t know I could be so happy!”  I told her that we had much the same reaction as her, but we'd moved just from California – something she had trouble believing. :)  She's never been out of northern Utah since moving here, but she recently bought a car and is planning a trip up and down the Pacific Coast for next summer.  Interesting conversation, especially for the perspective on living here...

No progress to report on the construction work.  Our doors and windows are due tomorrow, and our builder promises to install them “soon” thereafter.  The grading in the back yard is still on hold due to mud, but we've got dry days in the forecast for the next 10 days, so there's some hope that progress can be made next week.

I had a nice walk with the puppies yesterday afternoon.  I picked a moment when the weather radar didn't show any squalls approaching, and that strategy seemed to work – we were out for an hour, and we didn't get wet! :)  The puppies, newly groomed, had a blast (of course!).  Mako was particularly cute as he attempted to catch the many green butterflies that were fluttering about.  Both were particularly disgusting when they discovered piles of deer poop (a frequent occurrence).  In two of the photos below, I have them tied up to a wheelie line.  While they were tied like that, a small aircraft flew low and slow overhead.  The two dogs looked all around for the noise, and couldn't spot it, until they saw me looking up – then they looked up and saw the plane.  That started a round of furious barking, and great puppy satisfaction when the airplane left the area (they were certain they'd been the cause of its departure!)... 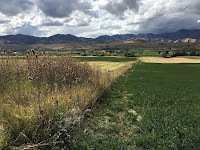 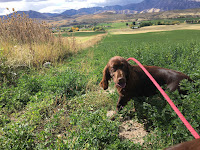 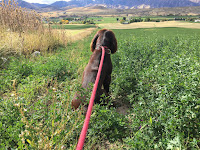 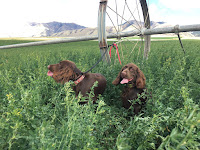 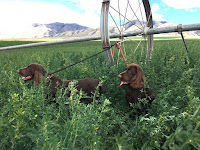 Posted by Unknown at (permalink) 6:26 AM