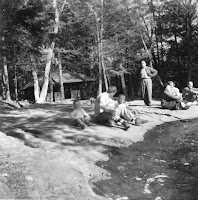 Here's one that confirms a guess I made in an earlier post.  On the back, in my mom's handwriting: “Picnic in the pines Lake Oswego”.  My dad is the man seated in the center of the photo; the kids with him, left-to-right, are my brother Scott, my sister Holly, and me (with my dad's arm on my shoulders, something I'd give a lot to feel just one more time).  The others in the photo are strangers to me, most likely just other people at the lake.  My dad's boots and his cotton twill pants are his normal attire – but not those socks!  I don't remember him ever wearing anything except plain white socks.  I'm guessing Scott is three in that photo, which would make this the summer of '57, when I'd have been four and Holly two.  I have lots of memories of the New Jersey pine barrens (which is what my mom meant by “the pines”, but none of Lake Oswego in particular.  It's a bit surprising to me that we went there at all, as its the sort of place my dad would have been quite uncomfortable with (he was every bit as introverted as I am; he'd have much preferred a remote area where we could be alone). 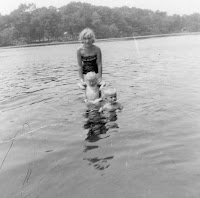 This photo is also from Lake Oswego.  On the back, in my mom's handwriting: “Bonnie + kids Lake Oswego”.  That would be my mom's younger sister (my aunt) Bonnie, quite the sweet young thing in that photo.  She's holding my brother Scott, and I'm just in front of her.  The lab dates this as December 1955, which means it was probably actually taken in the summer of '55, when I was three and Scott approaching two. 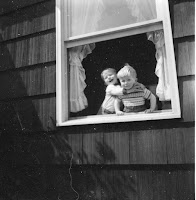 Here's my brother Scott and I, looking out of the north-facing window of our home's dining room.  I've got my arms around Scott's neck, though I don't think I'm actually trying to throttle him!  The photo is not dated and has no annotation.  From our apparent ages I'll guess that this was taken in '57. 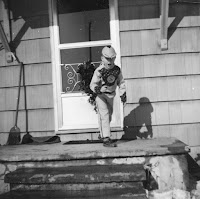 Here's Scott again, though I wouldn't have recognized him if it weren't for my mom's writing on the back: “Scott”.  That's pretty clear. :)  The lab dated it as February 1962, but I'm guessing it was actually taken some months earlier, in warmer weather.  He'd have been eight going on nine at that time.  That's quite an outfit he's wearing.  I don't recognize it, though its so distinctive it seems like I should!   He's standing on the little-used front porch of our home.  I see in this photo that the fancy woodwork I noted in an earlier photo, in the porch roof bracing, are missing now.  That may be why I don't remember them – apparently they were removed at some point. 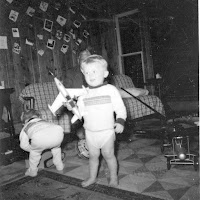 Here's another Christmas photo.  It's undated, but if Scott (standing with the airplane toy) is two here (and I was then three), this would be the Christmas of '55.  That's me with my butt to the camera, I presume (based on my mother's annotation: “Tommy & Scott”).  The man sitting on the couch, mostly obscured by Scott, is my father's father, my grandfather Earle.  To the right of Scott is some sort of riding toy that I can't figure out, and that I don't remember at all.  Note the old-fashioned cloth diapers... 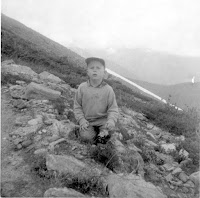 Here's a photo of me, dated (by the lab) February 1961.  I can't pick out any definitive clues as to the location, but it looks like somewhere in the mountains of northern Maine.  I'm dressed appropriately for an overcast day in the summer there, too.  So I'm guessing that this was actually taken in the summer of '60, when I'd have been seven going on eight.  Almost certainly I'd have been on a hike with my dad.  My brother Scott and sister Holly were often on these hikes as well (especially when we were eight or older), but I went on quite a few with just my dad and I; I'm not sure why this happened, or whether he went on hikes alone with Scott or Holly.  Those hikes alone with my dad were a big event for me, as often he'd take me somewhere that he wouldn't take a gaggle of kids – I'm assuming that was because of tall cliffs or something else risky like that.  One mystery for me in this photo: the diagonal streak leading up to my head.  I can't think what that would be other than snow, and I don't recall running into snow on our Maine hikes.  Also I don't see any snow on the distant mountains, and I'd certainly expect to if it was right behind me.  What the heck is that?
Posted by Unknown at (permalink) 7:28 AM