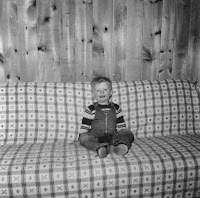 And here I am, sitting on a couch in our living room, with a dumb-looking grin on my face for no obvious reason at all.  This photo is undated by the lab, and has no annotations, so I can only guess that this is circa '56 or '57.  I don't remember that cover on our couch; it strikes me today as most unattractive. :)

The lab dates this photo as August 1952, just before I was born.  My mom wrote “Donnie” on the back, so this must be her brother (my uncle) Donnie.  He looks to be about 11 or 12 in the photo.  I've no idea where that was taken, but it looks much like some places I've been in the Appalachian Mountains of Pennsylvania or northern New Jersey... 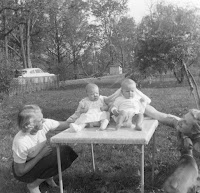 Here's a photo taken near our home in Robbinsville.  My mom's note on the back: “Holly Barnard on left, Holly Dilatush on right on the table”.  The lab dates this as December 1955, but it must have been taken before the leaves dropped in the preceding fall – sometime in late 1955 (as my sister Holly was born in April that year).   The photo was taken from a point northeast of our house, looking north-northwest.  The backyard fence I don't remember is visible at left.  My mom is at far right in the photo, with our dog Synda near her.  I don't remember Holly Barnard (or even anyone with the name Barnard), but I'm guessing the woman at left is Holly Barnard's mom.  That must be the Barnard's car in the driveway.  We had a similar car (a '48 Dodge) at one point, but it was black.  Behind the car you can see the (long!) ropes for our swing, and the branch that dad and Chalky managed to tie it up to.  That's way up there!  The little building visible above the kids is my dad's old chicken shack.  He dragged it up to that point with our tractor at one point (it had been down in the creek bottoms).  Later he dragged it around to the south of our house, practically out of sight, and it became my electronics workshop.  This was at the request of our mom, who was terrified that my electronics experiments – which, to be fair, blew up spectacularly fairly often – would burn down the house.  I don't remember what it was used for in the location shown in the photo, though I do remember it being there.  Over my mom's head you can see a rope angling up, and tied up to something I can't identify.  I don't have any memory of anything tied up there. 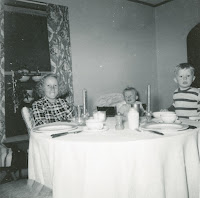 Left-to-right, this is my aunt (my mom's sister) Bonnie, my brother Scott, and me.  The photo is undated; on the back my mom wrote: “Bonnie & kids”.  From our apparent ages, this must have been in late '54 or early '55; my mom would have been pregnant with my sister Holly.  It was taken in our dining room, looking southeast.  The arched entrance to our living room is visible at right; an east-facing window at left.  I remember those shelves – white enameled metal brackets holding glass shelves; they always had plants on them, often African violets.  The silverware I remember well: stainless steel flatware with bronze-riveted rosewood handles.

This one brought back all sorts of memories, though not because I recognized anyone in it!  On the back, in my mom's handwriting: “Tillie Bard, her sister Mary and ?  Lincoln, Maine”.  It's undated, but from the cars it must have been in the late '50s.  The memory trigger was the name Tillie Bard: I remember her well, though my memories of her don't resemble any of the girls I see here!  I mainly remember her from the mid- to late-'60s, when she'd have been roughly ten years older than in this photo.  She was one of mom's best friends in Maine, and visited our camp frequently (and we visited her camp, and her home in Lincoln, fairly often as well).  I don't recognize the location, but I'm guessing that it's her home in Lincoln, Maine. 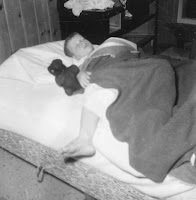 We'll end with this out-of-focus candid shot.  That's my brother Scott, in the bedroom he and I shared.  The lab dates this as December 1958, when he'd have been almost five.  For some reason the dresser behind him has all its drawers removed – I can't imagine why.  The window behind him would have been the south-facing window; under it is a piece of furniture I can't quite make out.  When we were just a bit older my parents bought a pine bunk bed set that freed up quite a bit of space in our little bedroom.  Mostly I remember these beds for an odd reason: Scott and I were once simultaneously sick with something that made us vomit.  We made quite a mess in that room, and my mom for some reason was unappreciative of our vomiting prowess. :)
Posted by Unknown at (permalink) 10:01 AM