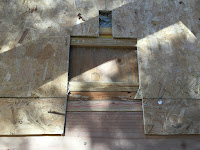 Paradise ponders...  I made quite a bit of progress on installing the new lights and outlets in our new sun room yesterday.  It turned out to be ... nowhere near as simple and easy as I had imagined.  Of course!  At right you can see a photo of what made things more difficult.  The photo shows the area over the doorway into the sun room after I removed some of the OSB sheathing, so I could see what I was up against.

I was expecting studs that ran the entire height of the end wall of our house, which includes a second story.  Instead, I discovered that the first story was framed exactly as if it was a one-story home, then the second floor was built on top of it.  The photo shows that discovery, which was momentarily disheartening.  There's nothing actually wrong with that approach to framing – it just wasn't what I expected.  And ... it made the job of installing wiring much more challenging, because there are no inter-stud voids that made it easy to run wires vertically.  After a couple hours of discovery and cogitation, I finally came up with a way to do it.  The method involves removing a lot of sheathing, fishing wires through small spaces, turning awkward corners by drilling 4" diameter holes to stick my hand it, etc., etc.

Yesterday, after the initial discoveries, I did about half the actual wiring.  This proved out all the techniques I came up with, and (for once!) they all worked just fine.  Today I should easily be able to finish this up.  At that point the wallboard could go on, but that won't actually be done until the mud room is ready to drywall as well.  That won't be until our builder finishes framing it, and they're late on that...
Posted by Unknown at (permalink) 7:33 AM