Paradise ponders...  This morning Abby S. was over for our regular tutoring session on programming.  She's learning how to write some detailed routines that involve loops, including nested loops and nested conditionals.  I think I may have hurt her head a little bit :)

Early this afternoon, Debbie and I headed down to the Maddox Drive-In and had ourselves a fine lunch.  It was a steak sandwich for me (and it really was a steak, not some thinly sliced stuff), and Debbie had a shrimp basket.  Both very yummy!  I had sarsaparilla, and Debbie had root beer – both homemade, and both excellent.

Afterwards we made a grand loop to get home.  We drove north from Perry (where Maddox is) along the western front of the Wellsville Mountains, then east on State 30 toward Logan, then south on State 23 toward Wellsville.  It was a pretty drive, partly through areas we'd never visited before, and that's always fun and interesting.  That stretch of State 30 that we drove on had lots of safflower fields (a couple photos below) growing on dry (unirrigated) farms.  It sure appears to be thriving!  The plants are allowed to go to seed, then the seed is harvested and pressed for the oil. 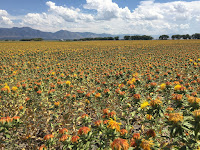 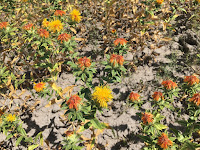 Posted by Unknown at (permalink) 4:00 PM