Paradise ponders...  Sorry about the absence, everyone – I was just a wee busy between all my usual chores and the fun job of escorting our Polish guest, Jo B., to see the sights in Cache Valley.  There wasn't any time leftover for blogging!  Jo is now in Chicago, visiting relatives, before continuing her American adventure in Charlottesville, Virginia and New York.

We only had three full days with Jo, but we packed in some fun things.  I took her four-wheeling (her first time ever!) on a fairly tame road, from Avon over the pass toward Mantua.  We couldn't go all the way through, as the road on the Mantua side is closed to vehicle traffic until July 15th.  Jo got some nice sightseeing though, anyway.  She wanted to see small American towns, so I took her through Avon, Paradise, Wellsville, Mendon, and Newton – very classic small-town America.  I also took her to Angie's to get an American breakfast – and her face when she saw Angie's huge portions was really quite funny :)  My breakfast (ham steak and eggs) took up three plates.  She took a photo of that, and if I can get a copy I'll post it.  Debbie joined us for a trip up to Hardware Ranch and along Ant Flats road, where Jo got to see deer, cedar waxwings, Sandhill cranes, and trout swimming in the stream.  Then we took her to Aggie's for an ice cream cone (she had a two scoop waffle cone, which looked to have most of a quart of ice cream in it – which she was quite satisfied with!).  Our driving tour through the temple grounds we kept short, because there was an event going on, but the grounds were gorgeous, as always.

A few random photos I took this week are below.  First one up is the sweet pea plantation in our “yard” just west of our house.  They're really quite beautiful at the moment.  The second photo is a plant that the locals call a “wild poppy”, but of course it's no such thing.  It looks like a relative of a plant we had down in the desert east of San Diego.  The last photo is just before sunrise one morning as I took the puppies out. 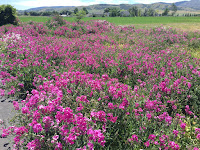 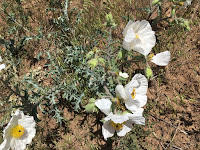 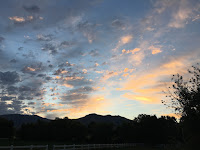 Construction continues, though of course not as quickly as we'd like :)  The photos below show the progress; the last three show the current state of things.  The footers are curing for the mud room and the sun room, but the deck's footers are not yet poured (and we're not sure why).  I ended up helping out a bit on the deck.  They needed six holes that were about 36" square and 30" deep.  Their backhoe's bucket was just too big to easily do that.  My backhoe's tiny bucket (12" wide) was perfect.  So I saddled up, dug those six holes, then helped fill them back in after they got the forms placed.  My little Kubota is handy sometimes :) 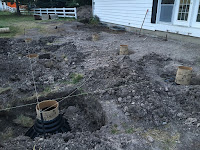 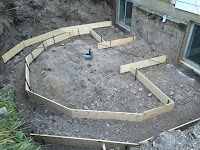 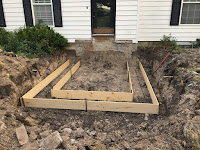 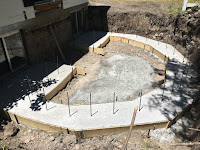 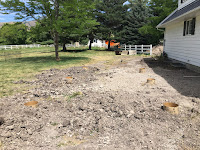 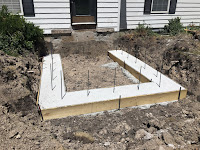 Posted by Unknown at (permalink) 7:51 AM