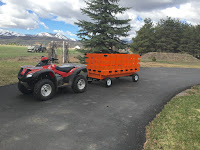 Paradise trailers...  The last bits of painting were done yesterday morning (black on the metal parts).  This morning I assembled the sides onto the trailer for its debut piece of work: cleaning up the trash alongside the highway.  I took the photo at right just before I headed out to the highway to pick up the debris my fellow humans decided to toss out their window as they drove by.  I'm not too happy with them at the moment, as my back hurts from bending over about 10,000 times to pick up their crap.  I cleaned up about a quarter mile of one side of the road, along our property and my neighbor Tim's.   All together I picked up about half a cubic yard of beer cans and bottles, fast food wrappings, and a little bit of just about anything else you can think of.  That included a baby bottle, an empty box of condoms, a quarter of a front bumper, a CFL light bulb, and a bottle of Oxycontin with several pills remaining.

In the photo you can see a tractor with a fertilizer spreader running in our field.  That's Scott N., the fellow who leases our south field, putting down phosphate fertilizer on the alfalfa he planted last year.  He rents that (quite nice) fertilizer spreader for $30 from IFA, the same place where he buys the fertilizer.  I had no idea that such implements could be rented at all, much less at that kind of a reasonable price.  I'm gonna have to check into that!

My little trailer caused a little stir this morning :)  First, our friend Michelle H. pronounced it “too cute!”  Then, after I took it out to pick up trash, my neighbor across the highway (Gary S.) drove over in his ATV to take a look.  He wanted to know what the orange blight was :)  Then I had two people driving by stop to ask where I'd bought it.  They were disappointed to hear that I'd built it, as they wanted to go get one for their ATV!

I'm very happy with how this project turned out, even though it was far more work than I'd imagined it would be – especially the painting...
Posted by Unknown at (permalink) 12:47 PM