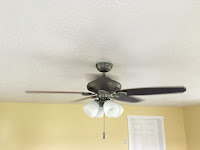 Paradise ponders, cont'd...  I ended up not working all that much on my office today – lots of other things intervened.  But I do have a photo of the ceiling fan, installed :)

My tutoring session with Abby S. went exceptionally well.  She is picking up the concepts behind programming quickly, and with great enthusiasm.  Today she and I worked together to build a little web page using the Web Audio API to play a single musical note that could be either a pure tone or a chord with an arbitrary number of component tones.  Her homework is to turn that into a program that can play two notes.  We'll be expanding this into a program that can play a tune.

I thought we'd spend most of today working on her understanding of a two-dimensional lookup table, where one dimension was indexed by the musical note name and the other by an octave number.  The result would be the frequency of the note.  Instead of spending an hour or so on it, she had it nailed in less than five minutes – and passed all my tests of her understanding easily.  This is a reasonably complex data structure for such a novice programmer, but she picked it up very easily.  As an experiment, I showed her how (in the debugger) to drill down into the “document” variable (which is a very complex data structure that contains the entirety of the currently displayed web page).  She got the general idea of that sort of nested tree structure immediately.

It's fun teaching someone so bright and motivated!  And Debbie loves to feed her treats, so we got a lemon pie out of this, too :)

My brother Scott came to visit a little later, and we went to my neighbor Tim D.'s house to pick up a load of firewood that Tim gave me.  While there, Scott got to meet Tim's wife Jeannie – and her new puppy Gus.  That little guy had just been brought home from the breeder, at age 6 weeks.  He looked terrified when we first saw him – it was his first time out of the crate he was born in.  By the time we left, about a half hour later, little Gus was running around playing with their other two dogs (Lexy and Marley), along with any human who happened to be standing nearby.  This little fellow is going to be just fine, I think.  Debbie came over to see Gus, too, and I think she's going to end up helping Jeannie train him.  That is one cute little puppy!
Posted by Unknown at (permalink) 4:40 PM