Snowy consequences...  The temperature is hovering right around freezing, which means the (totally unpredicted) volumes of snow that we're getting are heavy, gloppy, and wet.  For some reason one particular basement casement window is having lots and lots of snow pile into it – to the point where I started to get worried about its physical integrity.  The weight of that snow looked like it just might break the window panes!

So I ran out to my shop, found a piece of scrap OSB (chip board), and sawed it up into two 5' x 20" pieces.  Then I shoveled all the snow out from around the casement (this is while the roof was dumping more on me!), shoveled out most of the snow inside the casement, and covered it with those two pieces of OSB.  It looks like it will hold, and it definitely removed the immediate threat.  We're keeping an eye on the other casements, too, but so far none of them are getting large amounts of snow in them.  I know not why.

Meanwhile, some photos from around the place to entertain you.  If I didn't keep thinking about the work it's going to take to dig us out, I'd be entranced by the beauty of it.  The first photo shows our sidewalk after I shoveled off the first 8" or so.  In the fifth photo you can see the juncos that just don't care that I'm standing right next to them – they want that food!  The last is the same balcony shot I took just a few hours ago – look at all this white stuff! 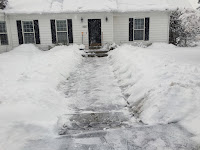 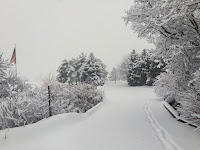 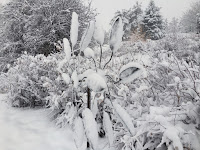 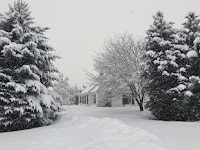 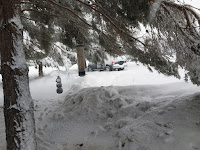 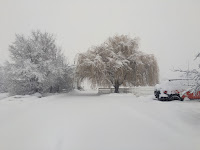 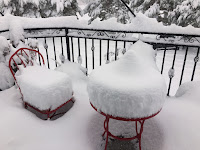