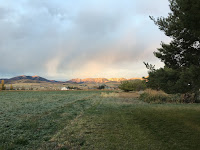 Paradise ponders...  I had quite the busy day today, though it certainly started off calmly enough.  Debbie and I took an early morning drive up to Hardware Ranch, hoping to see some wildlife.  We did, though not very much.  We left just after sunrise, as you can see by the photo at right, taken looking west just as we left our yard.  We saw one American dipper, doing his bobbing thing alongside a very frigid-looking stream.  We saw a small grouse, walking more slowly than you would believe possible.  We saw several deer.  We saw one kingfisher, briefly.  And best of all, we saw a small (juvenile?) beaver, gnawing on something alongside a stream.

When I got home, things started to happen just a tad more chaotically.  The solar folks gave me a call and said they were going to be at our house in an hour (at 11 am), bringing the horizontal boring guy with them.  Their plan was to lay conduit in a new trench 275' long, from the barn to the house's electrical meter.  They were bringing a “trencher” to dig that trench, though bits of it would have to be hand dug (where the new trench had to cross existing pipes and wires).  The first two photos below show the horizontal boring machine, and the third photo shows the drilling head emerging into the target hole – at most a quarter inch from the intended position.  No pipes were broken during the boring, thankfully.  The last two photos show the trencher in operation.  It makes a 3" wide trench to a quite precise depth, but quite slowly (though faster than I could do it with the backhoe!).  I did some backhoe work to help out, probably 20' of trench altogether.  Mainly this was in areas so full of gravel that the trencher couldn't get through it.  I ended up spending most of my day on this. 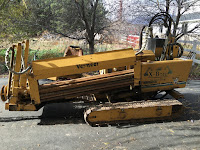 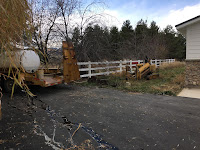 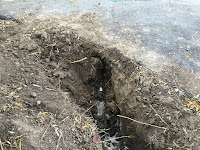 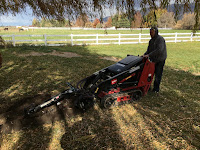 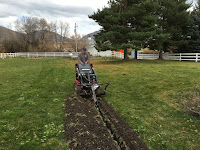 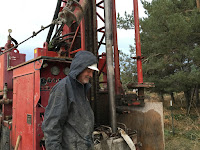 Elray the well driller (at right) is now down to 272', and in a formation that's producing a lot of water.  He was quite happy with this in the morning, but sometime during the day it looks like the formation collapsed (sandstone can be quite weak), and now the water coming up is full of a very fine sand.  It may clear up, in which case we're still ok.  It may not, though, and in that case we've got some tough decisions to make about whether to go deeper.  Tomorrow should tell...
Posted by Unknown at (permalink) 4:56 PM