Progress in Paradise...  As planned, Tyler Thompson and his crew from Golden Spike Electric got started on our backup generator project.  Most of the day was consumed by getting a pad poured on the north side of our shed to hold the shed's backup generator and propane tank.  Tyler and his crew may be electricians, but they are also more than competent concrete fabricators, too – they did a bang-up job on this pad.  It's 5" thick, rebar-reinforced, tied into the shed's foundation, and sitting on a bed of 8" of gravel.  I don't think it's going anywhere :)

The concrete truck was 90 minutes late, so Tyler and his crew repaired to the Hyrum Pizza Plus (one of our two favorite pizza places) for dinner, then returned after sundown to put the finish on what they'd just poured.  I couldn't get photos of the finished job in the darkness, and besides, I was busy holding a flashlight so these poor guys could see!

They also delivered both actual generators, and they are substantially larger than I was expecting.  I forgot to get some photos of them; I'll do that after they're placed – which will hopefully be later today, but possibly not until next Tuesday if the concrete hasn't cured sufficiently.

As has happened up here quite a few times before, I'm impressed with the work these guys are doing – and that's such a refreshing change for us after hiring contractors in the San Diego area.  All three of these guys are hard-working, concerned with quality, and skilled in their crafts (and even in some they aren't actually claiming!).  They're also very accommodating (for instance, they're not only pouring the pad for the generator they sold me, but also for the propane tank I bought separately), full of good advice, and cheerful in the face of any challenges (like seriously late concrete trucks).

We love living up here! 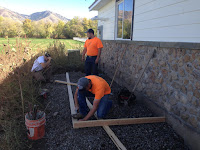 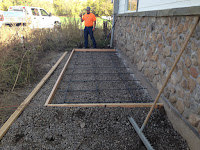 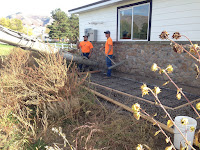 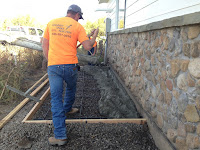 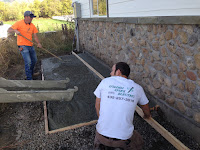 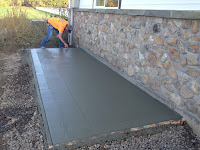 Posted by Unknown at (permalink) 5:50 AM