Paradise ponders...  I have great readers!  Yesterday I posted about not understanding how Gaussian elimination worked, and reader Richard Clark kindly posted an explanation – which I actually understood.  Mystery solved!

We've been seeing Bucky (the injured buck who's hanging around our property) quite a bit in the past few days.  He's taking to hiding under a big hawthorn next to the irrigation canal, and very close to our bridge over that canal.  The corn I've been putting out for him is disappearing daily, but we suspect that just about every animal in northern Utah is gnawing on that corn pile...

We took our usual walk this morning, albeit considerably later than usual – I didn't even leave until almost 10 am.  That's because it was cold here this morning – even at 10 am it was just 40°.  But ... we had wall-to-wall blue sky, crisp fall air, and with a light jacket I was quite comfortable.  The dogs, of course, had a wonderful time.  Some photos: 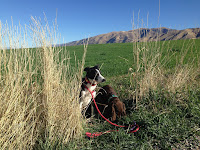 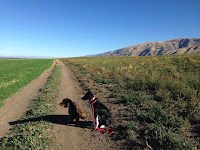 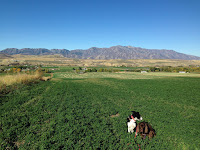 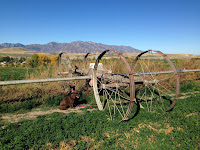 That last photo shows the little “pony” engine that moves a long string of wheelie line.  The white case encloses a small gasoline engine that's started by a starter rope.  Sometimes, when the engine is proving hard to start, one can hear words wafting across the field that are not normally heard coming from a Mormon :)
Posted by Unknown at (permalink) 10:33 AM