We caught a break in the rain...

We caught a break in the rain ... late yesterday afternoon, so we piled all three dogs into the truck and headed up to “Tony Grove” Lake (in Logan Canyon) to see what we could see in the way of fall color.

Our route took us right past the Aggie's Creamery, so naturally we stopped in for an ice cream cone.  Debbie had a repeat: one scoop of chocolate, one scoop of espresso chip.  I tried something new: one scoop of maple walnut and one scoop of caramel cashew.  I couldn't get a comment from Debbie, other than “Mmmmmmmm” :)  Mine was outstanding – just the way I like it, with a subtle and not-too-sweet flavor of maple and caramel, and lots of nuts.  I did have one small problem, though: my server was on his first day at work, and didn't yet understand the physics of ice cream cone preparation.  It was all I could do to keep my ice cream situated on top of my cone.  He hadn't stuffed enough of it down into the cone to keep it stable.  I made it without dropping the ice cream, though.  That would have been tragic!

I also bought a half pound of “Aggiago” cheese, which I haven't tried yet. 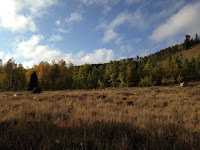 The drive up Logan Canyon was full of fall color, mostly visible to us on the canyon's sides (as at right).  Mainly we saw the oranges and reds of maples, though there were also a few oaks, and up high, splashes of yellow from aspens (not quite in prime color yet). 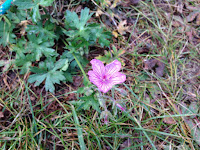 As we approached Tony Grove itself, though, things changed for the worse.  There are large areas of dead or half-dead aspen groves up there, and not a few dead firs.  We have no idea why that's the case.  Right around the lake itself we saw a bit of color, but truthfully nothing even close to the rather nice color further down in the canyon.  We walked the dogs up there (excited, they were!) and headed back home just before dark.  Where I walked the dogs, we saw this one lonely (and very late!) bloom on a plant I don't know.  Seems pretty weird to see this just a few weeks before there will be snow here...
Posted by Unknown at (permalink) 6:13 AM