Morning walk in Paradise...  We (Miki, Race, and I) left a bit later than we generally do, and went a bit further along a new route.  This took us over a “dry hay” field, which you can see in the last two photos below (with two cute dogs!).  The locals call any unirrigated field planted with alfalfa or grass a “dry hay” field.  Usually these are fields that are impractical to irrigate, either because of their steepness or because they're too far from any source of water.  In this case, neither applies; the slope is gentle and an irrigation canal runs along the field's eastern border.  The density of the alfalfa plants suggests that at some point in the past this field was irrigated, but either the owner lost water rights or his interest, or it wasn't economically viable.  It hasn't been cut this year at all, and the only grazing on it has been from deer and elk.

The first two photos show a beautiful irrigated alfalfa field that's quite close to the dry hay field.  This field has been cut, raked, and baled twice this year already – and will most likely be cut this week for the last time this season.  This hay goes to a dairy a few miles north of us, and they've collected a lot of hay this year.

We saw several hawks this morning, but nothing like the hawk density of the past few weeks.  We also see no voles any more, and I suspect the former is caused by the latter.  Something we did see in abundance: a small, yellow-green butterfly.  They are everywhere in the fields.  My beloved sunflowers are done for the year, I'm sure to the relief of my readers who have put up with 10,000 photos of them :) 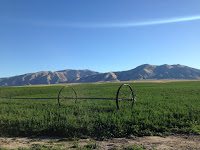 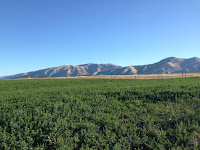 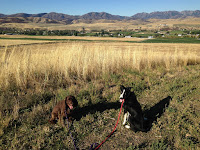 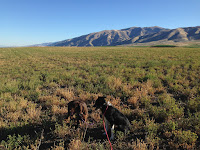 Posted by Unknown at (permalink) 9:43 AM