A nice day in Paradise...

A nice day in Paradise...  Miki, Race, and I started off with our usual walk.  The skies were notably hazy.  We've read that the haze is actually diffuse smoke from the wildfires currently burning in northern California, eastern Oregon, and northern Nevada.  The only wildfires in Utah right now are small and south of us, which is not upwind.  This haze may continue for some time, as the fires are in no danger of being controlled.  I'm not real happy about the haze, but it beats the heck out of being in actual danger from the fires, as we used to be in southern California...

The major event on our walk from the dogs' perspective was a weasel running across the road about 50' in front of us.  Race, especially, went on full “Get the animal!” alert, straining at the leash so hard that I had trouble keeping control.  He was so disappointed when I didn't let him off-leash to go chase the weasel! 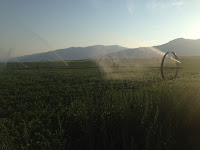 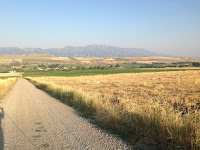 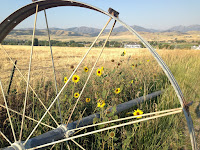 A little later we loaded up all three dogs and headed for the groomer in downtown Logan.  There we dropped off the two field spaniels for a (much needed) haircut, and continued on with Race.  We headed out to Bear Lake, where we had a nice meal at the Cafe Sabor.  I had a burrito that was big enough to house a dog or two; all I could do was to eat the meat out of it.  Debbie had a chipotle chicken salad that she completely demolished.  We got into a conversation with our waiter, who told us about a spectacular wildflower site: the shores of Lake Bloomington.  That small lake is over 9,000 feet high, and is in the bottom of a north-facing glacial bowl.  It's a 20 mile four-wheel trip, followed by a two mile hike – just the sort of day trip we love.  Gotta check it out next year!

After that we headed out on a clockwise circumnavigation of the lake.  We were actually a bit disappointed.  Partly this was because of the haze obstructing what would have been gorgeous views of the lake's famously blue water (the color is due to tiny suspended particles of limestone).  Mostly, though, it was due to the fact that nearly all the lake's shores are built up with resorts – and this time of year, those resorts are crowded.  Also the state parks with their beaches and boat rentals were also crowded.  This was less true on the eastern shore, but still the scene was much different today than it was in the late winter when we last passed this way.  The few stretches of lakeside with farms were pretty, but one can't help thinking that they will soon be developed as well.  Indeed, on a couple of the farms we passed there were “Coming soon!” billboards advertising the imminent availability of lots on big meadows that were even then being mowed for hay.  It made us sad.

There was one moment of sheer joy on the eastern shore, though.  Not so much for us, but for Race.  We let him out on a boat ramp, and as I took him (on leash) down toward the water, he started whimpering in anticipation.  When I let him off leash, he raced down to the water and leaped in.  He started playing with the wavelets, batting at them with his front paws and biting any that had the impertinence to show some white water near him.  We let him play for ten minutes or so, and he came back one very happy dog.  Also very wet :)

As we came around the southwestern quadrant of the lake, we decided to try a four-wheel road back toward Hardware Ranch (close to our home).  We didn't have any maps, but we had a general sense of the direction we needed to go (southwest), so we just headed that way.  That route was much more to our taste than the lake route.  We saw one deer early on, but (to Debbie's disappointment) no other wildlife – unless you count steers and sheep, which we saw plenty of :)  To my surprise, there was good signage on these mountain roads – much better than we're used to in a National Forest.  We ran into signs pointing to Hardware Ranch early in the trip, and just followed them.  It was interesting for us to see this back country for the first time.  The variability was greater than we expected, with patches of meadows, aspen forest, conifer forest, mixed forest, pinyon/juniper/sage territory, streams, cliffs, and narrow canyons.  It really wasn't what we expected at all.

After emerging onto paved roads at Hardware Ranch, we zoomed up to retrieve our two field spaniels, now almost unrecognizable in their resplendence.  That won't last long :)
Posted by Unknown at (permalink) 6:14 AM