Morning in Paradise...  We (Miki, Race, and I) took our morning walk a little earlier than usual – so early that we actually got back before sunrise!  The time between about an hour before dawn and about an hour after dawn is full of changes, especially in which wildlife is out and about.  This morning we saw a deer about a quarter mile away, munching its way happily through the alfalfa.  We also saw a dozen or so quail, far more than we usually do.  About halfway through our walk (a half hour or so before dawn) we started seeing flycatchers and barn swallows, looking for the bug breakfast.  Early in the walk, a big fat vole came running down a rut in the road, straight toward Miki.  He completely lost his mind trying to get to it.  Race, two feet away, didn't see the vole and just stared at Miki, trying to figure out why Miki was going crazy.  Race never did see the vole :)

In the photo where the dogs are sitting on a bale of hay, that's the middle size of the three common sizes around here, and it's probably the most common size.  The dogs give you some idea of the scale, but keep in mind that the side visible in the photo is the small side – the long side is about twice that length.  The two of them easily jumped up to the top – they're good agility dogs.  When I posed them in front of the barley (second photo), they were both very puzzled about why we'd stop here, where there was nothing interesting to investigate.  Miki is looking towards the left because we had just flushed a pair of quail, maybe 10 feet away in that direction.  He badly wanted to go there! 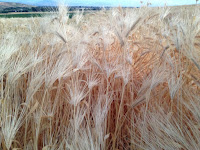 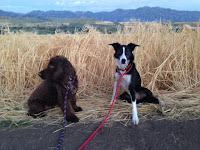 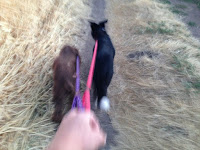 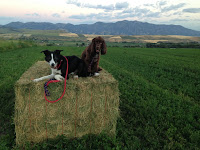 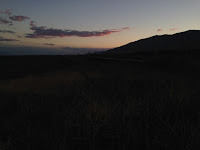 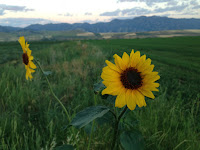 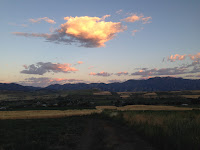 Yesterday afternoon I went in for physical therapy on my shoulder.  Both the doctor and the therapist diagnosed my occasional right shoulder pain as caused by a weak supraspinatous muscle (who the hell comes up with these names, anyway?).  The therapist told me that this was very common with people who have spent years in a sedentary occupation and then become more active.  It only bothers me occasionally now, but they assure me it will get worse if I don't do anything about it.  The good news is that the treatment consists of the world's easiest set of exercises.  I've started them, and I'll be checking back in with them in a week.

My neighbor Tim D. called me this morning, asking for some help.  His field was baled yesterday, with those medium-sized, 1,000 pound bales.  They're going to be sitting there drying for a few days, and he wants to start irrigating the east side of his field.  So he asked me to pick up some of the bales on the east side of his field, and drop them on the west side.  That will give him a bale-free area to start irrigating.  This is the same fellow who helped me, without my ever asking, about 1,500 times in the past year – so to have a chance to help him out pleases me greatly.  I'll be out there as soon as I finish my physical therapy...
Posted by Unknown at (permalink) 7:11 AM