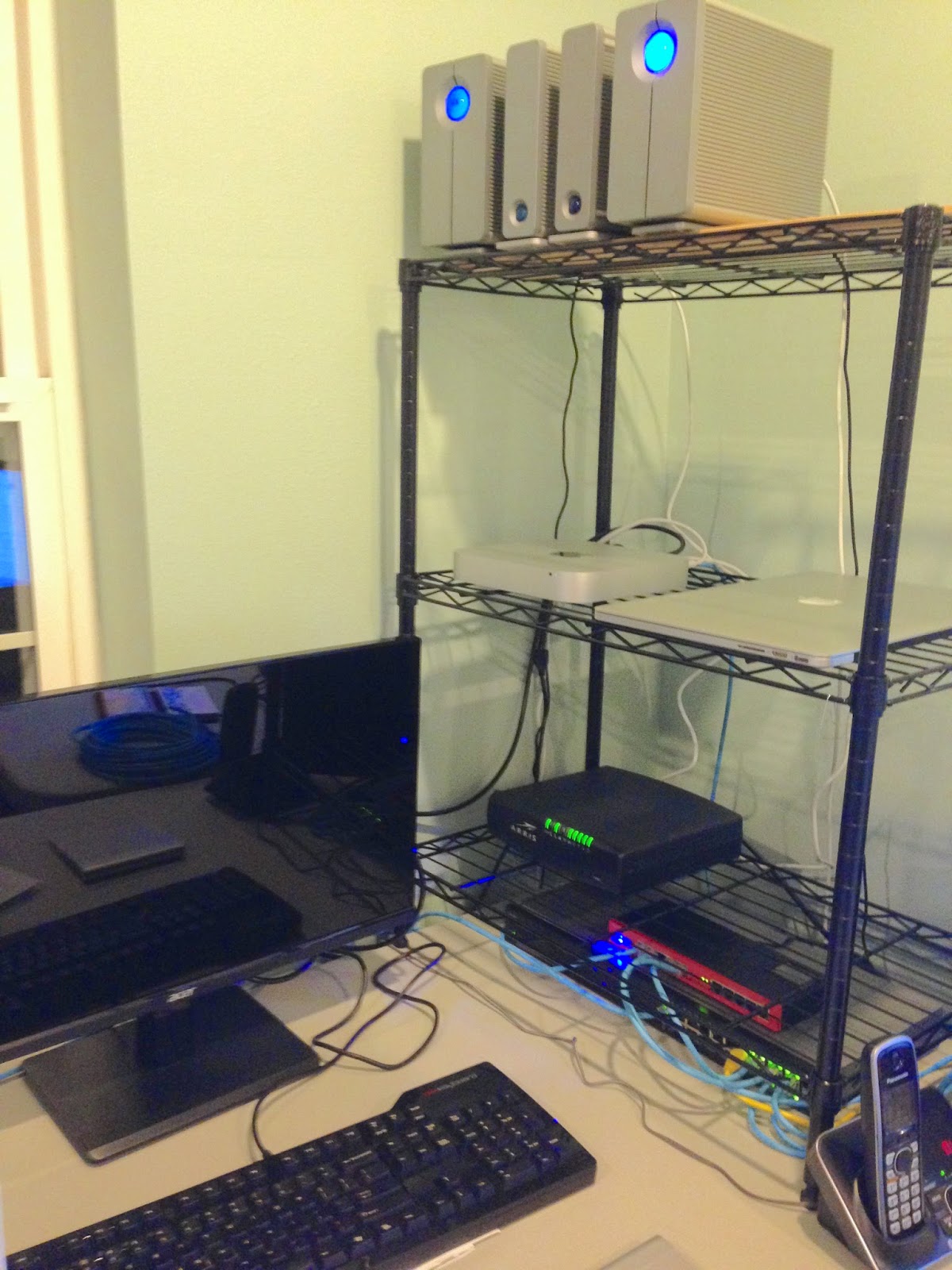 Progress report...  So the home & barn network is now completely up and running.  Yesterday I was able to bring up the barn router, switch, and WiFi access point quite easily, as their configurations are nearly identical to the same units in the house.  Now all I have to do is to pull an Ethernet cable from the second floor office to the basement :)

The photo at right shows our house “data center” – remarkably small and quiet for what it does.  The top shelf is a row of backup disks, for local Time Machine backups.  We also have our two main computers being backed up by the online service BackBlaze, my favorite of all that I've tried (which is most of them!).  The middle shelf holds our Mac Mini Server and my MacBook Pro.  The bottom shelf has just the Arris TG862 cable modem (for Internet and telephony).  Under the bottom shelf is our Cisco SG300-20 switch (configured as a layer 2 switch with client and server VLANs) and our MikroTik RB2011UiAS-IN router.  Of all this gear, only the MacBook Pro has a fan ... and only rarely is it audible.  The backup disks do make a little bit of noise during a backup, but I have to strain to hear even that.  My clicky keyboard makes much more noise than any of these things :)

Not so many years ago, gear with the same capabilities as that pictured would have cost well over $10,000, been big, clunky, rack-mount stuff that sucked a few thousand watts of electricity, and you'd be well advised to wear hearing protectors if you approached within 25' or so of it.  Now that gear is cheap (well under $1,000), quiet, and uses little power.  One thing, though, really hasn't changed at all: it's still laborious and manual to set up.  For two of these units (the switch and the router), configuration began with arcane commands entered through a serial port – exactly like I did when I first began working with this sort of gear in the late '80s.

On a completely different topic...

When we bought the house in Paradise, there was a wine cooler under one of the kitchen cabinets – a conventional refrigerator with a wine rack, made by Avanti.  I knew nothing about these things, but it seemed to be nothing more than a refrigerator with odd shelving.  We pulled the cooler out when we had the kitchen floor redone, and I noticed that the electrical outlet was badly installed (a recurring theme in the home).  The cooler has been out ever since, waiting for me to repair that outlet.  Yesterday I did so, and pushed the cooler back in – only to hear some ominous sparking noises.  I quickly pulled it back out and discovered that the tolerances inside the cavity were so tight that the power cord had been bent when I pushed the cooler back in.  This explained why the outlet was so badly installed – the previous owner's solution to this problem was to mount the outlet at an angle to the wall, so that the power plug didn't protrude quite so much!  I replaced the power plug with a flat, low-profile plug and powered the cooler back up ... and then discovered that the logic board for the refrigerator had blown up.  Random lights flash, numbers show up incorrectly, etc.  A little research on the web led me straight to the problem (a static-sensitive part that commonly dies, custom made for Avanti) and the bad news: the logic board was no longer manufactured, and replacements were going for more than the price of a new cooler!  We also discovered that the Avanti coolers were consistently the lowest-rated brand.  So Debbie and I did a bunch of research on the topic, and located a much highly-rated unit that doesn't have a compressor (it uses silent thermoelectric technology), holds more bottles, and costs less than the closest Avanti model.  We'll have to adapt our under-counter cavity a bit, as these things apparently don't have any size standard – every single one we found was a different physical size!  Another project :)
Posted by Unknown at (permalink) 4:51 AM