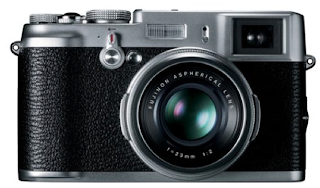 When Debbie and I first planned our imminent vacation (back in December), I decided that this time I was going to bring along a point-and-shoot camera.  This thought came from two things: the desire for a decent camera small enough for me to carry everywhere on the trip, and the evolution of digital cameras to the point where a great camera could be made in a very small form factor.

So I did my research, not having kept up all that much with camera development.  I settled on a camera that was due for release in March, but had been extensively previewed and reviewed: the Fujifilm FinePix X100.  It looked like everything I wanted: high-quality, well-constructed, small, and simple – but capable of some very fancy photography when I wanted it.  I placed my pre-order, happy to wait until March.  That would give me plenty of time to get familiar with it before our vacation.

Then came the earthquake.  Amongst the more trivial of its effects was the delay of shipments on my camera.  Until yesterday, I still had no idea when it might show up.  Just a few days ago, Debbie and I discussed an alternative plan: I'd buy a readily available, less expensive point-and-shoot camera for the trip, and she'd use it for her dog shows afterwards.

But yesterday afternoon I got a very nice email: my camera was being shipped, and should arrive on June 8 (next Wednesday).  They couldn't have timed this much more closely – I'll have the camera for just two weeks before leaving on vacation!

I've got some practicing to do...
Posted by Unknown at (permalink) 7:55 AM