The drone leaves home ... and we feast again...

The drone leaves home ... and we feast again...  Debbie and I ventured out to Blacksmith Fork Canyon this morning, and made two drone flights along the way.  Our skies are full of smoke from wildfires in California, Nevada, and Utah (see pollution report at right; click to embiggen).  That particle count is normally around 15 or 20 for us, and often below 5 – so the 132 reading is pretty bad.  Even at short distances of a few hundred yards, the “fogginess” in the air is quite evident.  Our eyes burned a bit, and I had a couple of coughing spells.  In the videos you'll see that smoke, where normally we'd have perfectly clear visibility.

We spotted a bald eagle perched near the pond behind Hyrum Power's dam.  As quickly as we could, we got the drone out, set it up, and attempted to capture some footage of the eagle – and we did!  We also flew up alongside the angled bluff above the eagle, and shot a little footage of the dam and the pond behind it, all just for practice.  The best parts are three short sequences at the start of the video.  After that there's a blooper reel of sorts, which would, I'm sure, amuse anyone who actually knew what they were doing with this stuff.

Further out, near Hardware Ranch, there's what looks like an old mining road.  It leads up to a couple of rock outcroppings – small bluffs, really.  We've long thought this was a pair of abandoned mines.  This morning we flew the drone over the road and the suspected mines locations to see what it really was – and now I think those are just rock outcroppings with animal trails leading around them.  No mines. :)

Our first impression of flying the drone around in the back country to take video?  It's going to be a lot of fun for both of us! 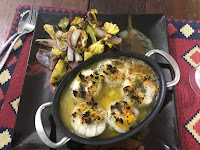 When we got home, Debbie whipped up a meal for us (at left) and my brother Scott, who's been slaving away pruning at our house. Oh, you should be so envious!  Those are fresh Oregon sea scallops, broiled with a lemon/garlic/butter sauce and topped with lemon rinds and garlic.  She's been making these for years, but it seems like every time she gets them even better than the time before.  And of course it doesn't hurt a darned thing that we're now able to get fresh (never frozen) scallops.  The vegetables are Brussels sprout sections and Bermuda onion pieces, coated with olive oil and seasoning, and roasted in the oven.  Heavenly, every last bit of it!  By the way, this (like everything Debbie cooks these days) is very low in sodium.  We've been a very low sodium house now for almost two years.  I've never liked very salty foods, but now after Debbie has got the spices-instead-of-salt down pat, I've gotten to the point where restaurant food tastes too salty to me much of the time – even places and dishes that I used to like just fine.  I've been spoiled!  And I'm convinced now that salt is just the easy way out – the “substitute” spices are superior to the salt!
Posted by Unknown at (permalink) 3:14 PM