A little catching up...

A little catching up...  On Thursday evening we went on a wildlife viewing expedition, sans drone – what a mistake that was!  Despite the smoke in the air (still very bad) and lots of traffic, we saw a lot of wildlife.  The first photo below was a real surprise for us: an osprey, perched in a dead tree right on the road's shoulder, about two miles from the mouth of the canyon (not a place where we've seen the osprey before).  Then just east of the holding pond, Debbie spotted a moose – a big bull (second photo), antlers in velvet, browsing on willow.  Later we saw lots and lots of does with fawns (mostly twins), several young bucks, a bald eagle, Sandhill cranes (last photo), kingfishers, about ten million swallows (up at Miller's ranch), kestrels, and probably some other critters that I've forgotten.  We're going to repeat the trip on Monday evening, this time with the drone.  Of course we'll probably see nothing on that trip. :) 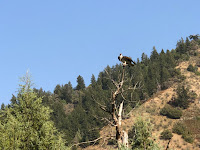 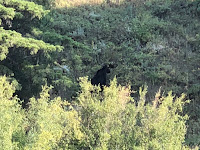 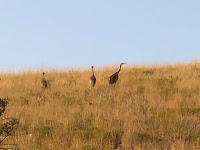 Our purchase of our friend and neighbor's property is proceeding rapidly.  Closing is scheduled for next Wednesday.  The real estate people involved seem a little befuddled by how easy the transaction has been – no series of offers/counter-offers, a handshake (literally!) agreement on price, all cash, no seller incentives – they almost don't know what to do. :)  I have to line up a surveyor soon, to let us split up that lot into two pieces: one that we're keeping, and one that we'll be selling.

Debbie made us a memorable meal yesterday – we got fresh mussels from our grocery store, and she cooked them in a white wine, butter, and garlic base.  Damned fine, they were!  Next time we see them, we buy more – a pound between the two of us left us wanting more.

Friday night we went to the Cache County Fair and Rodeo, and had a grand time except for having sore butts and backs from sitting on the stadium seating for four hours.  The barrel racing was again my favorite event – it was a very close competition this year!  I just ordered us some folding stadium seats, as we seem to be doing this four or five times a year...

Saturday was sod day – our yard workers cut out a bunch of sick and dead grass and replaced it with new sod.  They also prepped our “dead zone” – two acres of lawn-to-be.  They're getting ready for seeding it all in a few days, after the abject failure of the seeding last fall.
Posted by Unknown at (permalink) 10:27 AM