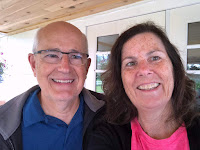 We're baaaaack!  Our friends Jim and Michelle B. have, sadly, departed for their home in the high tax, underfunded pension headquarters also knows as Southern California.  As always, we had a wonderful time during their visit.  They were only here for a week this time, and that time seemed to just fly by – seems like we were waving goodbye the day after they got here.  Next year they're going to try to make it up at the end of August, and see Paradise's Trout & Berry Days.  This year they watched the Fourth of July fireworks at Hyrum with us, and it was just as good as it was last year.  We had lots of good talk, good food, and good times together.  Maybe they'll escape California someday and join us up here... 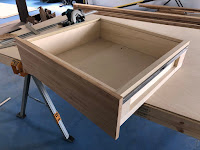 Jim and I built two (of seven) drawers for the grill cabinet while they were here.  The photo at right shows a nearly finished drawer, lacking only the handle and the spar varnish I'll finish it with.  There are an amazing number of parts in that drawer: 16 pieces of framing wood (poplar), 4 pieces of trim wood (also poplar), 1 piece of 1/2" birch plywood (bottom), 4 pieces of 1/4" birch plywood (sides), 3 pieces of cedar (front), 40 pocket screws, 2 slides, 20 wood screws (to hold the slides in place), 1 handle, 2 handle screws.  When you add all that up, that's 93 parts –  for one drawer, and I'm making 7 of them.  That's 651 parts in all!  Some of the steps in building the drawers involved gluing and clamping; a couple shots of those below: 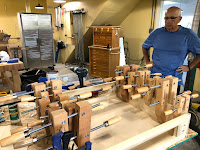 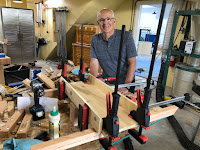 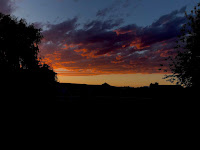 Here's a nice sunset we shared with Jim and Michelle, enjoying it from our deck.  The weather here was hot every day they were here, except for one morning when we had a few scattered showers.  Every morning Jim and I went out at just after 6 am and moved irrigation pipes, along with our neighbor Nick S.  This is something I've been doing here for years, usually just Tim D. and I.  This year, as I've written before, he's unable to do it – it's a privilege to be able to help him, but I miss his company while we do it... 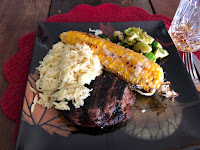 We got our new grill installed just a couple of days before Jim and Michelle arrived, but we used it several times during our visit.  Jim and Michelle have lots of experience grilling, and Debbie thoroughly enjoyed having the chance to get some tips and instruction from them.  I thoroughly enjoyed the results, such as the steak and grilled vegetables meal at right.  Yum!

Two days before Jim and Michelle got here, we had our once-every-two-years driveway resealing done.  We used Statewide Paving for the work, and this makes twice that I've been very pleased with the job they did.  The owner's son (Andrew) both supervises and participates in the work, and everyone works their butt off to get the job done.  Their attention to detail beats any paving contractor I've ever seen at work.  This time, for example, they found a place in my driveway where there were a couple hundred square feet with embedded soil (from where we had piled dirt during construction).  Rather than just coat over it, they took an extra two hours to power-wash that part off – and charged me nothing extra for that work.  If you need a driveway resealed, you can get Andrew at 208-317-4418.  Highly recommended.  Here's a few shots of them working away... 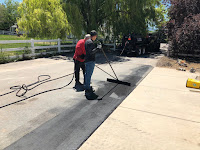 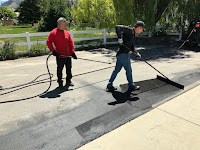 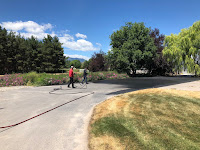 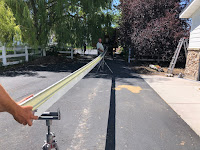 Another thing that happened this past week: our roofing contractor showed up to finish up some work started almost a year ago (seriously!), and to put gutters up on my barn.  The barn has 82' long eaves, so they bent up two 82' long gutters – quite a big piece of sheet metal to carry around and install!  The photo at right shows the metal as it came out of their automated gutter bending machine. 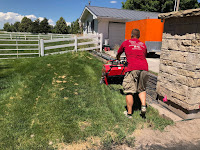 The contractor who works on my lawn, sprinklers, etc. came out with an aerating machine – a “core aerator”.  This is possibly the most evil looking machine I've ever seen.  Dave M. is guiding this beast in the photo at left.  The front end of this machine has dozens of “teeth” that dig down about 3" into the ground and pop out a round “plug”, leaving a little hole in the ground.  It also left my lawn covered with thousands of what look like small dog turds.  :)  Those, I'm assured, will disappear after a few waterings.  We'll see. 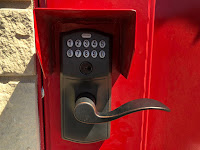 On the day that Jim and Michelle got here, I finished a couple of projects on my gas pumps that I shelved last year when it got too cold to work outside.  One was to replace one of the filter cups – that took just a few minutes.  The other was a bit more challenging: installing an electronic lock on the “gas station” door.  That's what you see in the photo at right.  It actually wasn't very hard at all to install, once I figured out the directions – they were harder for me to understand than such directions usually are, despite being written by a native English speaker (so far as I could tell).  One part I found challenging was that the directions were divided up into “panels” for each of the 10 steps they identified.  The panels were numbered, but the number wasn't particularly prominent.  The physical layout of the panels on a single large sheet of paper was really odd – they started about 1/3 of the way down the left side of the paper, went across to the right, then back to the left margin and down – and subsequently over three vertical columns.  Why would anyone lay out directions in such a confusing way?  Things like that really puzzle me.  Anyway, eventually I found the numbers on the panels and was able to do the steps in the right order, which turns out to be critical for success.  When I got all done, everything worked on the first try – even programming in my own codes.  Now our gas station has a lock, and (much more relevantly in our area) a latch to keep it shut when the wind blows.  Hooray!
Posted by Unknown at (permalink) 11:51 AM