The grill cabinet is started!

The grill cabinet is started!  I was able to put four solid hours into this yesterday, and I got a lot further in that time than I expected to.  The first photo below shows the four pieces of a side frame, after cutting and drilling.  The poplar is very fine-grained, saws beautifully with no splintering, and drills easily and smoothly.  It's very nice to work with.  The second photo shows a horizontal piece (with the holes) and a vertical piece clamped together and ready to be screwed together.

My friend Mike B. warned me that I had to be careful that the alignment didn't drift apart as I screwed in the special screws, but with the clamp as shown I had no problems at all.  He also warned me that the square driver tended to pop out of the screws and into his hand; again, I've had no such problem.

The third photo shows all four main members screwed together.  To my surprise, the squareness of the result was perfect – no tweaking required.  The fourth photo shows the same side frame with four diagonal pieces put in for strength.  That's a completed side.

I then built a second, identical side and a slightly wider frame for the back, using the same general design.  In the fifth photo one side is clamped to the back, ready to be screwed in.  This was my first attempt at a 90° joint using the pocket screws, and it worked just as well as the other joints.  Finally, the last photo shows both sides connected to the back.  That's a nice strong frame, and the building of it was easy and fast.  This cabinet isn't going to be as much work as I thought it would be!

I have three units to build, all similar but different in the details.  Today I'll finish the burner unit (that's the one I've started) and start on the other two.  I suspect I'll be all done with the poplar cabinet framing by Tuesday at the latest (tomorrow is ... yuk! ... bookkeeping day).  Then it will be time for the plywood tops and bottoms... 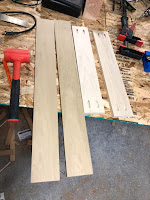 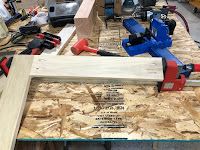 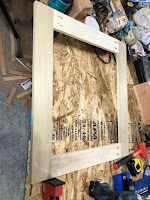 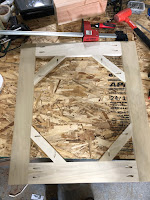 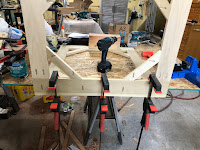 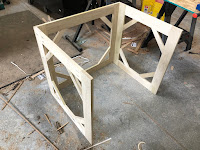 Posted by Unknown at (permalink) 7:57 AM