Hanging around Kalispell...  After we arrived in Whitefish (just north of Kalispell) and checked into our lodging on Monday night, we were exhausted.  Debbie had the brilliant idea (especially in hindsight) of eating at the hotel's restaurant instead of driving into town as had been our plan.  The restaurant got good reviews on Yelp, so we thought we'd be ok.  Well, we were ok and then some!  Our delightful waitress Natalie strongly recommended the grilled elk tenderloin, so we tried it – and man, were we glad we did!  That was hands-down the best elk dish we have ever had.  So on Tuesday morning, we went there for breakfast – and it was just as wonderful as the dinner.  I had a special, pulled-pork and eggs with a mild verde sauce; Debbie had the stuffed French toast.  Both were outstanding. 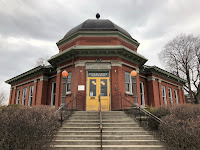 After breakfast, we visited Lazy K and Advanced Powder Coatings to take care of our actual business up there.  After that, we had some time to just hang around the Kalispell area.  The first thing we did was to visit the Hockaday Museum of Art, in a former Carnegie library (my photo at right), right downtown.  We'd read about an exhibit of bison engravings they had going on, which sounded interesting to both of us.  It was even more interesting than we'd expected.  Most of these engravings were woodblock prints, but there was one exquisite engraving that was perhaps the best example of a steel engraving print I've ever seen.  The detail was such that you'd need a magnifying glass to see it.  It's hard to even imagine the patience it took to make that engraving with nothing but a block of steel, scratch awls, and an idea.  The exhibit including engravings from every phase of European's encounters with bison, and the commentary that accompanied the exhibits ended up giving us a nice history lesson – much of which is quite sad.  It treated the American Indian's involvement quite objectively, which I was glad to see.  “White men” and American Indians both carried out the near-extinction of the bison, a fact which all too many history books ignore in their efforts to blame Europeans...

After our enjoyable visit to the museum, we headed up to Whitefish to search out a pottery store that we'd read good things about.  Here we were a bit disappointed.  There was some stuff there that we found attractive, but the majority of the pieces were of the imaginary category Debbie and I call “modern art”, which is really our catch-all term for art that we don't understand, don't find beautiful, and really don't understand why anyone does.  That store was full of it. :)  However, on our walk toward the pottery store, we happened by Sprouts, a store selling children's clothing.  Now you might well wonder why we might be interested in such a store.  It's all because of our friend Michelle H., whose daughter Lizzy is also a friend.  Well, six months ago Lizzy had her first child (and Michelle's first grandchild): Lily, a beautiful little red-headed girl.  Debbie was hoping to find a store with locally-made clothing for Lily, and at Sprouts she hit the jackpot.  We came home with a complete wardrobe for Lily!  :)

We were ready to pack it in for the day at that point, and we headed back to our hotel.  After a bit of discussion about where to eat dinner, we decided ... to eat at the hotel again.  It was so good!  This time Debbie had an all-appetizer meal, with a nice salad, a bowl of excellent parsnip and cauliflower soup, and luscious elk meatballs (below).   I had the soup as well, along with crispy roast duck.  I love roast duck, and have had it many times; this was among the best I've ever had.  I especially enjoyed the contrasting flavors of the Brussels sprouts and apple slices along with the rare duck.  Most delicious, that was!  We had no room for dessert, though we suspect it's just as wonderful as the rest of the food there... 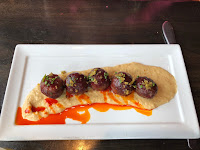 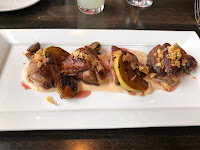 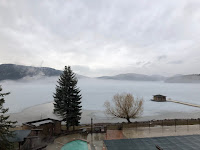 Back in our room the lake fogged over in a light rain.  That made the beautiful scene at right, from the balcony of our room.  We left at 4:30 am on Wednesday, and drove back home without incident.  I did cut the battery management a bit close on the Missoula-to-Butte segment: we pulled into the Butte supercharger with a mere 6 miles estimated remaining in the battery.  That's the closest call I ever made on that!  I have no idea how accurate that gauge is, or whether there's any reserve built in (as there is on gasoline-powered cars), so I'm not entirely sure just how close I really cut it, but still...

We pulled into our driveway at about 6:30 pm, and both of us were very tired.  After greeting the animals, we were snoring in short order...

Posted by Unknown at (permalink) 7:54 AM