Some random things...  I felt lousy most of yesterday, and I woke up feeling about the same this morning – some kind of virus that's giving me a low-grade fever and a general feeling of unperkiness.  The part I hate the most about these sorts of illnesses is what the fever does to the working of my brain: it feels like all my thinking is proceeding through some thick fluid that makes everything happen soooooo slowly.  Mental activity that's normally effortless for me (say, adding a couple of numbers in my head) is so hard I can just barely force myself to do it.

Despite that, some nice things happened yesterday and this morning. 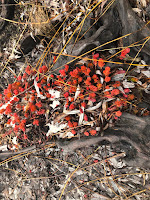 For starters, we got some rain last night – something like a half inch, maybe a little more.  Apparently it got cold enough so that we also got a little snow, but I'm sure that will be gone in short order.  The rain cleared most of the snow piles that had been remaining, and it also woke up some of the plants around our place.  At right is some sedum my brother Scott gave me a couple of years ago, planted in a big piece of driftwood.  Sometime overnight it turned from a dull brown into this red gloriousness.  Gorgeous, it is!  If you look carefully, you'll see that there is still a bit of snow stuck in it.  I'm pretty sure that's old, unmelted snow, as this is sheltered under a willow that otherwise has no snow under it.

A few days ago I saw an old friend's posting in Facebook after I logged in for the first time in five or six years (I hate Facebook): Vera S., whom I met at work in FutureTrade in 2002.  I messaged her, and yesterday she messaged back to invite me to call.  Last evening we (she, Debbie, and I) had a wonderful conversation, just reconnecting after our last conversation back in 2011.   Now we have her new email address and her phone number, so we can stay in touch.  We also have her commitment for a visit up here (she and her husband Konstantin live in Huntington Beach, California).  We're so looking forward to that!

After talking with Vera, Debbie and I finished a game of Mexican Train.  Debbie loves this game, at least partially because she beats me about 99% of the time.  Somehow yesterday, despite my mental fogginess, I eked out a win (score sheet at right, low score wins).  That was startling enough that I had to take a picture of that score sheet to preserve it for posterity! :)

This morning Debbie shocked me to my core.  After I took my shower and wandered out into the kitchen, I discovered a bowl of creamy chicken noodle soup on the table for me, and shortly after I sat down she delivered two pieces of buttered toast and a cup of heavenly Darjeeling tea.  This sort of thing is quite rare these days! :)  To be fair, this is largely because for most of the past four years she's been limited in her ability to move around due to her multiple knee and back injuries.  I cannot even remember the last time she made breakfast like this.  Her explanation: I'm feeling yucky, so she wanted to take care of me.  Maybe feeling yucky isn't so bad after all!
Posted by Unknown at (permalink) 8:01 AM