You should be envious... 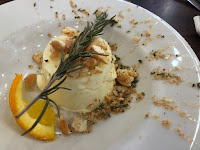 You should be envious ... as this is what I had for dessert today, at Jack's.  It's an orange-rosemary panna cotta, and it was brains-fall-out delicious.  I had the pina colada version of this last week and thought it was great – but this version is even better!

While we had lunch today (with our friend Michelle), we watched the webcast of the spectacular launch of the SpaceX Falcon Heavy.  The image of the two side cores landing side-by-side looked like something straight out of a science fiction story.  It occurred to me that the science fiction trope of a flying car has at last become reality, with Elon Musk's Tesla roadster now in Earth orbit (and soon to be solar orbit).  That's not quite how I imagined flying cars would turn out, but ... it will do.  It will do...
Posted by Unknown at (permalink) 4:25 PM