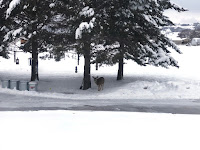 Morning, deer, and a few other things...  When there was just barely enough light to see this morning, I looked out to our bird feeders to see if they were empty.  I spotted this deer scrounging the seed that birds had kicked off the feeders and not yet cleaned up (eventually they get everything edible).  I couldn't see well enough to tell if it was a buck or a doe – the bucks have lost their antlers by now, so the only way to tell is by getting a good view of their nether regions, or the back of their head (where you can see scars on a buck).  From its behavior (feeding alone), I'd guess this is a buck, but that's just a guess.  This one is being relatively polite and not knocking down my feeder.  Good deer!

The photo looks like broad daylight only because I've manipulated the exposure to make the deer more visible, and corrected the white balance to eliminate the blue twilight cast.  This is actually a good demonstration of the iPhone X's low-light capabilities, stabilizer, and telephoto – this was very low light, long exposure (1/15th), no flash, hand-held, on 2x optical telephoto.  Pretty amazing for something that weighs a few ounces and is the size of a thick postcard...

We got an email from an old friend last night, a woman I worked with through the '90s and up to '02.  She's 70, her husband a little older, and they're just now retiring.  They sold their small farm for cash, only to discover that the buyer was a gang-connected drug and gun dealer.  They went through a series of physical and legal adventures, including flying bullets, when finally this bad actor was arrested, arraigned, agreed to a plea deal for 15 years in federal prison.  Her (long) email reads like a précis of a script for a Hollywood production.  Holy cow!  And this sweet lady is someone who, if you were to meet her, you would think was primarily occupied with crafts and homemade shortbread.  I'm going to reply to her shortly, but right at the moment about the only thing I can think to say is “Holy shit, woman!”

Thursday we dropped off our little Munchkin (the male kitten who fell into our casement window a few months ago) and Ipo (the sweet female field spaniel whose owner didn't want her, and we adopted) at the veterinarian's to be neutered.  We picked them up in the afternoon.  Munchkin was back to his normal self within an hour or so of getting home.  One of the vet techs brought Ipo out to us, and while she was waiting for us to finish the paperwork she sat down in the lobby with Ipo – who was wiggling her butt to beat the band, and just loving all the attention from the vet tech.  I'm not sure she really wanted to go back home with us. :)

Yesterday afternoon we were relaxing at our kitchen table after a very filling meal at La Unica.  Debbie was reading about the animals up for adoption at the Cache Valley Humane Society (she does this almost daily).  She spotted a cat named “Tigger” that reminded us both of our beloved Maine coon Halala Pala, who died of cancer a few years ago.  Then we read the description and discovered that Tigger was 12 years old – and we knew that cats of that age are nearly impossible for organizations like the Humane Society to adopt out.  So we talked it over for a minute and then decided to go get her.  Which we did!  The staff at the Humane Society was delighted that someone came in specifically to get Tigger.  They tested her for FeLV (negative!) and in an amazingly short time we walked out with Tigger in a carrier.  She's now ensconced in her own little queendom carved out of our cattery, where she'll get as much time as she needs to get used to us and the other cats.  We found out that she was an indoor-only cat, the only pet of an elderly lady who has become unable to care for Tigger.  I'll post some photos when she's willing to come out of hiding...
Posted by Unknown at (permalink) 7:47 AM