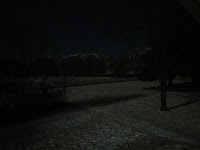 This and that...  We've had a very pleasant few days, a bit quieter after the Christmas season that was so busy around here.  The moon this morning was awesomely bright in a totally clear sky – so bright that I was able to take a photo by moonlight on my iPhone (at right, unretouched - click to embiggen it, and you may have to turn your screen's brightness up).

Yesterday Debbie and I went up to Angie's to get our late breakfast.  Debbie had country fried steak and eggs, and I had the special: a 16 ounce ham steak and eggs, with hash browns and rye toast.  Debbie ate nearly all of hers, but I just barely got through half of that enormous (and delicious!) ham steak.  The two girls who served us were both friendly and helpful, a pattern there that is part of the reason we like the place so much.

I've mostly been working on bills and catching up with our health insurance (both of us were forced into new plans this year because of insurance products being dropped, because they lost a lot of money in the Obamacare exchanges).  I have over 300 pages of insurance-related paper that I'm plowing through, trying to figure out what is what, and (especially) what I have to do or pay in order to maintain our insurance.  It's absolutely crazy how complex this is; it's getting to the point where it rivals income tax in complexity - only I have no software to help me with that, as I do with my income tax.  I'm a bit tired of this insurance crapola ... and I'm damned tired of paying the absurd premiums that we do in return for the even more absurdly limited benefits... 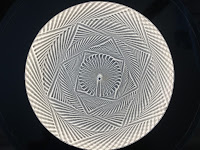 In between rounds of attack on the paperwork I've been playing with my Sisyphus table.  At right is a photo of the latest thing I managed to get working: an actual pattern.  That particular pattern is made entirely of straight lines, and the straight lines were the hard part.  The way the table moves the ball isn't what I had expected, and not like any other device I've ever run into.  That doesn't mean it's bad, just that it was surprising to me how it works.  Just for an example, suppose the ball starts out at the top dead center: that's zero degrees, distance of one.  Further suppose that you tell it to move to 90 degrees, distance of 0.5 (that would be to the right of center, halfway to the edge.  It doesn't move the ball in a straight line to get there.  Instead, it moves both the distance and the angle at a steady rate until it reaches the target location.  That produces a segment of a spiral, which is rarely what you actually want - and it certainly isn't a straight line!  To make it move in what appears to be a straight line, I have to send lots of commands to make small movements.  One apparent straight line might be made up of 20 or 30 much smaller movements, each of which is actually a spiral segment, but which is so short it appears to be straight.  That pattern displayed above required 4,854 small movements in order to make it look like I drew it using a bunch of straight lines.  Next I'm going to see if I can make it do arbitrary Bezier curves.  That will be a tad more difficult, I suspect... :)
Posted by Unknown at (permalink) 1:22 PM