Of search fails, wipers, socks, and snow...  How on earth shall I tie all those notions together?  The easy way, of course – by not!

Google has apparently decided to stop indexing my blog – searching for posts that I know I've made shows no results.  This is a bit surprising since this blog is hosted by Google's Blogger platform!  I've no idea what rules Google uses when deciding what to index or not index, but I do have two standout suspicions.  One possibility is that the web is getting so damn big (over 130 trillion pages as I write) that even Google can't keep it all indexed.  If they could index a million pages per second (and I'm pretty sure they can't index anywhere nearly that fast), that would take over four years to index.  The obvious strategy there is to index fast-changing sites more frequently, and that strategy used to be why blogs tended to be well-indexed.  That strategy isn't good enough these days, so I don't know what they do anymore.  The other possibility is that non-progressive voices are being systematically suppressed by blocking them from indices, including both Google's and Twitter's.  There is some persuasive evidence of that from the more popular conservative or libertarian web sites.  Possibly my site is being caught up in that.  If that suppression is actually occurring, it's political meddling that I'm very sorry to see – but not particularly surprising, knowing the rather evident progressive leanings the leadership of most of our big technology companies...

One of my favorite things about owning a Tesla Model X is the way new features appear like magic, every time there's a software update for the car.  Those updates don't happen on any particular interval, but the average seems to be about two a month.  In one of the recent updates, the automatic windshield wiper feature was included.  The car already had the sensor installed, but the software to make it work hadn't been finished.  Now it is, and the automatic wipers work great!  Unlike other automatic wipers I've used, so far I can't seem to predict when they're going to trigger.  When enabled, they've always worked before I would have manually triggered them, so I'm very happy with the new functionality.  Because I can't predict the triggering, though, I'm guessing that there's some AI (a neural network) involved, and it's using “rules” created by the training they did – and nobody has any clue how it works.  That sort of thing doesn't bother me at all when used to control something as innocuous as windshield wipers.  Controlling the steering and brakes is a whole 'nother beastie...

I know I've written about my Wigwam socks before, but searching for that post gives no results.  I've been very pleased with these.  I bought my first few pairs three and a half years ago, and then more a year and a half ago – and I have yet to wear a hole in a single pair of them, nor has the elastic lost any of its sproinginess.  At this point I'm certain the extra cost was more than made up for by their longevity – without even considering the extra comfort and warmth they provide.  Highly recommended! 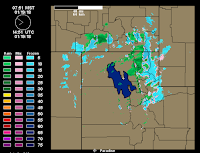 We are to be slammed with rain and snow today, if we're to believe the weatherman.  The current radar image (at left, click to embiggen) lends him some credibility.  During the day it should be well above freezing, so it will be rain and hopefully it won't freeze on the ground to make a sheet of ice.  This afternoon and tonight, though, our temperatures will dip below freezing, and that rain will turn into snow.  Oddly, the forecast doesn't include an actual amount of snow, so I'm not sure how much we're likely to have on the ground tomorrow morning.  Almost certainly it will be enough that I need to break out the snowplow again...
Posted by Unknown at (permalink) 7:00 AM