It's sopping wet outdoors...  Temperatures are in the 40s, and it's been drizzling all night.  According to our 10-day forecast, we have very little chance of more snow.  Much of our snow cover is gone or turned into translucent slush.  With any luck at all, there will be enough sunshine today to get rid of even that.  Thankfully I have very little that I must do outside today.  I need to take the garbage to the curb, and that's about it.  That's doubly nice, as I've been feeling a bit under the weather the past couple of days – feels like some sort of a cold.  I have a fever, so I'm operating with a less-than-normal number of functioning brain cells. 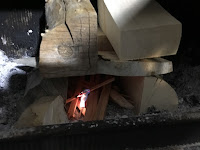 My new office heating system (the fan that circulates air from my heated first first floor) is working like a charm.  Each morning when I come over to my office, the temperature is right at 64°F, no matter what it is outside.  My preferred working temperature is about 10°F above that, so I am now developing the habit of lighting off a fire in my little woodstove first thing every morning.  The photo at right shows my usual morning “stack”, just after I set the match to it.  The kindling you see is remains of western cedar lumber that I trimmed when installing the ceiling on our deck last fall.  That stuff burns with a match put to it, even the thicker pieces of it (roughly 1/2" square cross-section).  You can see the sawn logs, the result of another morning “ritual”: grabbing two softwood logs from my pile and sawing them up for the day's fuel.  I sawed those logs in the photo about three minutes prior to starting the fire.  In about 30 minutes, my office will be a toast 75°F or so – just right!

Another morning habit, one of long standing, is to take a gander at the major stock market indices, especially the S&P 500 and the NASDAQ-100.  Until the past year or so, when those indices moved in the morning, I had at least a rough idea why, and I understood the logic.  I could usually predict when such movement was likely to be short-lived or long-lived.  Those days are completely gone.  There's so much thrashing on topics of economic importance in the news that I can't possibly keep up with it all.  One of Trump's tweets can move the markets by several percentage points, and damn near on a daily basis.  If you apply, say, a 30 day running average, things look more predictable – but really, no more understandable to me.  I'm delighted that the market is moving positive at a dizzying pace, but I can't claim to have any real understanding of why it is.  The pundits all merrily pontificate, but their track record is so bad that I try very hard to ignore them.  I'm sure the party will end one of these fine days, but I couldn't tell you if that will be later this morning, or in 2054...
Posted by Unknown at (permalink) 6:41 AM