Sisyphus table...  If you're an ancient enough American, you may have learned enough about Greek mythology to have encountered Sisyphus: the king who was being punished by forever rolling a boulder uphill, only to have it roll back down and run over him.  It was the first “Groundhog Day” I ever encountered, only his never ended.

Well over a year ago, a small group with both artists and technologists started a Kickstarter project named after Sisyphus, because their intended product worked by endlessly rolling a boulder (actually a steel ball bearing) around.  They called it a “kinetic art table”; I call it intriguing and beautiful.  Basically it draws patterns in a thin layer of fine white sand – any pattern you want.  When I decided to back this project, for almost $1,000, it was by far the biggest Kickstarter project I'd ever backed – most of them were well under $50.  It felt like a big risk, but everything I read about the team sounded good – and they had a working prototype.  So I took a chance on it.

Yesterday my Sisyphus was delivered.  The company did a beautiful job with it, including in oft-missed details like packing and directions.  I had it unpacked, assembled, and running it's first pattern (at left, below) within 15 minutes.  The center photo below shows it nearly finished with an erase cycle.  At right is a new pattern just barely started (and you can easily see the ball at top center).  It's fascinating to watch it work.  Except for the moving steel ball, the mechanism is completely hidden – if you didn't know how it works, it would look magical, with a steel ball moving in a precise pattern of its own volition. 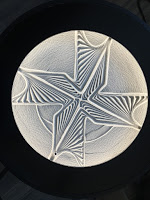 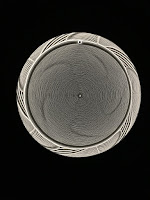 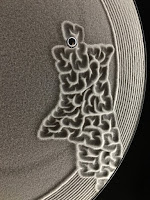 So how does it work?  Well, underneath the table is a strong magnet that attracts the steel ball above.  That magnet is moved under the control of a computer (a Raspberry Pi 3B, in fact).  There are two stepper motors and a “rho-theta” positioning mechanism, meaning that the magnet can be positioned at any angle from the center, and at any distance from the center.  That's an interesting choice; the more conventional solution would be an X-Y positioner – but the rho-theta mechanism perfectly suits a round table (an X-Y positioner would fit a rectangular table perfectly).

There is a Sisyphus community that has lots of downloadable patterns – and it's possible to make your own patterns.  I'm going to have some fun with this thing!
Posted by Unknown at (permalink) 7:30 AM