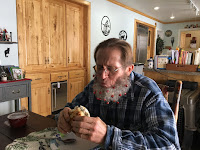 Merry Christmas, everyone!  We've had a lovely few days, filled with friends, a relative, and a painful amount of delicious food.  I was very surprised that I could still squeeze into my pants this morning!  That's my brother Scott at right, as he was yesterday afternoon.  He's having a “snack” – a roughly one pound chicken salad sandwich Debbie made for 2:30pm, so he didn't starve before his dinner at 6 pm.  He also had a half cup or so of a (very rich) chocolate mousse. We played Mexican Train with him for a couple hours, then he took off for an evening with his friends in Newton, including a home-cooked meal with their family. 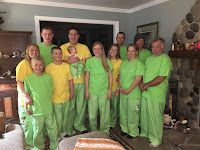 We've had a string of visitors the past couple days, including by a local family we've become very good friends with.  The matriarch of the family is Michelle, the woman in the yellow shirt to the left.  We see her several times every week, and talk or text nearly every day.  The young woman in the middle is Lizzy, Michelle's daughter and the mother of Michelle's first grandchild, Lily, being held by her dad (McKord) in the back row.  We see Lizzy and Lily often, as they're frequently with Michelle and live nearby (in Hyrum).  The young boy at front left is A.J.; he loves our dogs and now has one of his own (a year old border collie).  The rest of that crew is Michelle's husband Kevin (at right) and her other five kids, plus one daughter-in-law.  They have a quirky family tradition that's lots of fun: Michelle makes matching pajamas every year for the whole clan, and they wear them all day on Christmas Eve.  This was much easier when the clan was just her, Kevin, and one or two babies – it's a tad more challenging now!

I don't think that families like their realize quite how much they mean to Debbie and I.  We just showed up in their midst less than four years ago, two weird, non-Mormon people from a place (California) most people here see (accurately, I have to say) as a den of iniquity and progressive stupidity.  Instead of burying us on the back 40 (as any sensible community would have done), they welcomed us and made us part of their community.  The same thing is happening with my brother Scott, 20 miles away in Newton, with an entirely different but equally welcoming community.

We love this place!
Posted by SlighlyLoony at (permalink) 6:44 AM