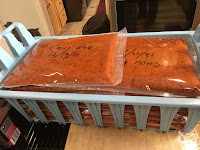 Chili, snowy dogs, and bearded brothers...  A few days ago, Debbie made a gigantic pot of chili, filling our 25 quart pan to within a few inches of its top.  It's a great batch: meaty, tomatoey, and not too spicy hot for my taste.  After it cooled down, and after we made two meals of it, the leftovers got vacuum-bagged.  This is what it looked like when we finished bagging.  That's a lot of chili!  If you're wondering what the “RTE” means, it's “ready to eat”, meaning no meat needs to be added (though Debbie may want to put more meat in anyway – my girl loves meat!).

A few days ago we let the dogs out into the back yard while it was still snowing heavily.  They went out and played in it without a care, of course.  I took the photos below when they came up on our deck to see me.  Note that many of them are blurred from motion: getting them to stand still was basically impossible! 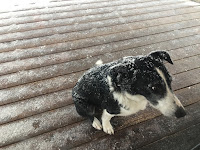 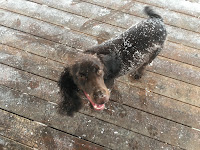 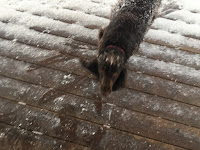 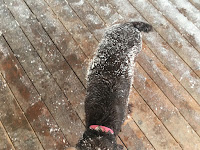 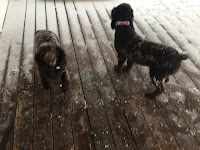 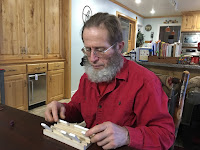 That's my brother Scott at right.  I got a photo of him when he was (I think) unaware of it, concentrating on his game of Mexican Train in our kitchen.  Debbie is beating the crap out of us, of course.  We'll be finishing this game later today,  and I'm sure in the end Debbie will be victorious again.  She's running about 9::1 wins against me.  We had our big dinner yesterday mainly because the lobsters arrived on Friday.  We'd originally planned to have Scott here for Christmas Day (and his birthday) as well, but his new friends and neighbors near Newton had other plans for him.  He's been invited to spend Christmas Day with a family nearby him, people he's become friends with over the past year or so.  Today he's going caroling with a local group in the morning, and he's got some other activities this evening.  He'll be with us for a few hours this afternoon, for chocolate mousse and to finish letting Debbie whip our butts.  It's wonderful that he's finding so many caring and accepting people near him – he's got a support network already!

We got surprised yesterday ourselves by what seemed like a non-stop series of visits from friends and neighbors.  These ranged from people we see often to one couple we hadn't seen in two years!  What a delight it was to see all these people, unexpectedly!  Many of them brought gifts, too, we caught us completely by surprise.  It's plain these people know us well, as our gifts all fell into two categories: things for the animals, or food for us. :)  Our birds are getting two presents this morning: a beautiful new feeder for black oil sunflower seeds, and some “pears” made out of seeds glued together with a suet/honey mixture that was somehow solidified (not sure how they managed that!).

We love living here, in the postcard that is Cache Valley...
Posted by SlighlyLoony at (permalink) 6:29 AM