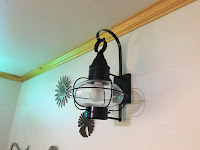 Paradise ponders: kitchen lights, roast turkeys, and delicious pasta edition...  I completed a nice little project yesterday: installing a new lighting fixture to brighten up a formerly rather dim corner of our kitchen, right where we have our little kitchen table.  That's a place where we typically spend several hours a day, so the dim light was something we weren't very happy about.  The perfect place for a new light would have been directly over the kitchen table – but there was no obvious way to get power to that location unless we tore up a whole bunch of wallboard.  One day a couple weeks ago it dawned on me that there was a power outlet near the floor right next to one side of the kitchen table.  That meant a straight shot up to the top of the wall, presumably with empty space between studs – so it should be possible to “fish” a wire through that space to a light.  That would give me power – but how do we control the light? 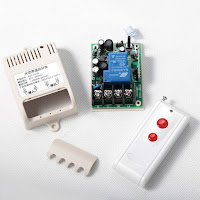 What I needed was some kind of remote switch, where the electronics for the switch could be hidden inside the wall, near the light.  I searched all over Amazon and found nothing that looked like it might work.  Then I tried eBay, and bingo! – a remote-controlled relay, controlled by RF through a little transmitter.  At $13.95, I could hardly complain about the price.  In fact, that's so cheap I was worried about it being junk – though the photo looked like a well-made device.  I took a chance and ordered it.  It came very quickly, and I opened it up to see if it matched the photos.  It did, in every respect – and with the opportunity to make a close inspection, I'm actually pretty impressed with its design and construction.  The relay is a hard-contact relay, which made me feel better about hiding it in the wall: those old-fashioned relays are more likely to fail than a modern solid-state relay, but much less likely to burst into flames under any failure mode.

So yesterday I dragged out my tools and started making holes in the kitchen wall.  To Debbie's credit, she didn't panic when I took out my oscillating saw and attacked the wallboard. :)  The only real challenge to the project was getting the wire from the outlet down low to my new hole up high.  I used a fiberglass rod “fish” to get through a new hole in the outlet's box to my new high hole; that worked out quite nicely.  The rest was just screws and wiring.  When I got it all hooked up, I took out the remote control – and it all worked on the very first try.  That's $13.95 I'm very happy to have spent! 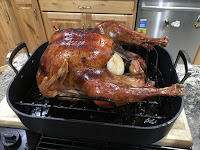 While I was working away on the new light, Debbie was roasting a turkey.  It was finished not long after I finished putting the light up.  That turkey wasn't for our meal: we're going to debone it, use the carcass for soup stock, and cut up the meat for sandwiches and for addition to some turkey tlapeno soup.  Yum!  What we had for our dinner yesterday was some pasta and sauce we bought last week from Caputo's, dolled up with burger, ground pork, onions, green peppers, and mushrooms.  That was some darned good pasta!  We ate about a quarter of the gigantic batch Debbie made; the rest is all vacuum-packed and frozen now.

This morning we're headed down to Salt Lake City to raid MacBeath Hardwood.  I've never been there, but it looks like a place I will actually enjoy shopping in.  We'll likely stop again at Caputo's, at the very least to pick up another panettone (we got one last week that was simply outstanding).  I suspect we'll also be grabbing some lunch down there...
Posted by Unknown at (permalink) 4:05 AM