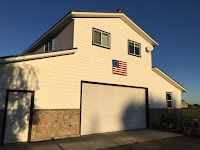 Paradise ponders: catch-up edition...  Just after dawn on the morning we learned that Debbie's mom had died, I walked out to our barn ... and saw what you see in the photo at right.  The sight of that flag makes me think of my mom and her love of all things crafty every time I see it.  I have no equivalent piece of memorabilia for Kate (Debbie's mom)...

Debbie arrived safely in Ohio yesterday afternoon.  Her sister Judy picked her up at the Cincinnati airport, then took her back to Judy's home near Oxford.  Debbie used gate-checking for the first time on her trip yesterday, and was very happy with the results: her luggage arrived in Cincinnati along with her. :)

As I mentioned yesterday, I've been working steadily on the deck project in between bad weather and all the other things happening in our life.  In the first photo below, you can see my clamping arrangement for one of the dowel-pinned butt joints I made in the rails (one in each of the four rails).  In the second photo you see one of the butt joints after gluing and sanding – they came out very well indeed, with an almost invisible joint.  Despite the good results, if I ever do this again I'm going to use a half lap joint instead – they're much stronger, though a bit more challenge to get perfect.  The third photo is of the cedar ceiling again, and the fourth is the finished redwood rails, after their last (of six!) coats of polyacrylic finish.  I used satin polyacrylic, lightly sanded with 600 grit paper between coats, and I'm very happy with the results.  Now I just hope it stands up to the weather as promised!  The fifth photo shows the (much less messy!) deck with the rails in place, and the last photo is a closeup of a rail and stanchion.  The color for the stanchion's finish was chosen by Abigail at Lazy K Wrought Iron – it sure looks good with that redwood!  Speaking of Lazy K, they're going to be making the metal framework for our deck stairs as the next project they do for us... 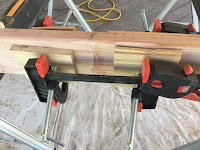 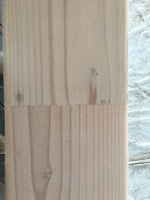 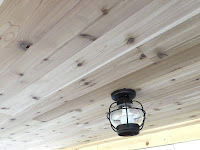 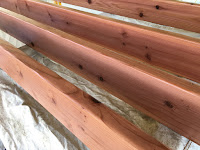 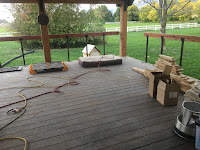 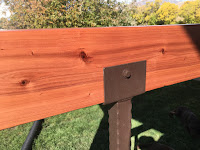 Yesterday when the sun broke out in the afternoon, I took a ride up Blacksmith Fork Canyon to Hardware Ranch.  It felt quite odd to do this by myself!  I didn't see a single animal, and only a couple of birds – but the fall color was just spectacular.  I had spotted the orange and red hillsides through the rain earlier in the day, but when the sun came out ... well, see for yourself: 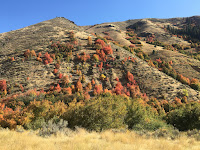 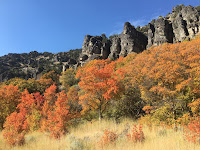 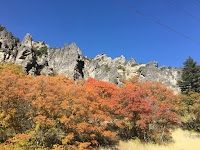 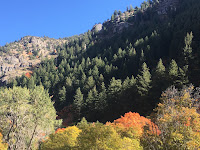 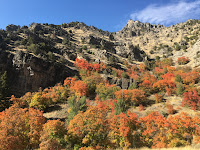 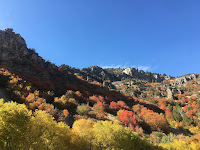 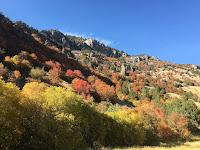 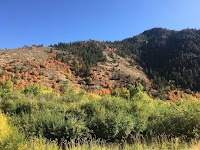 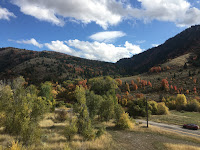 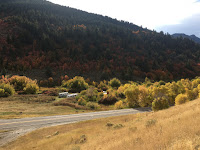 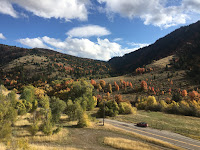 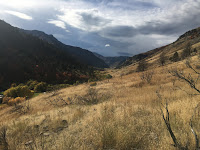 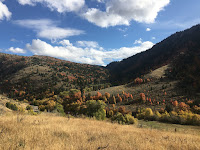 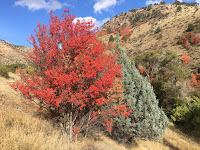 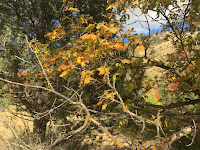 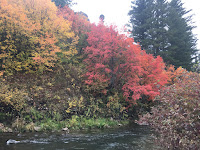 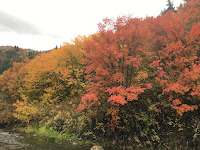 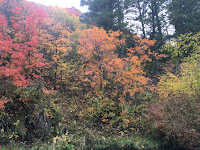 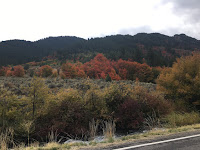 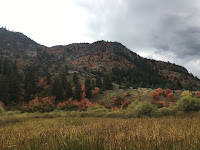 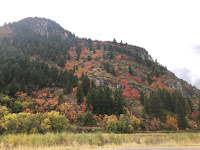 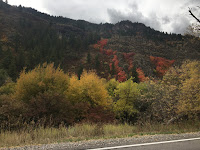 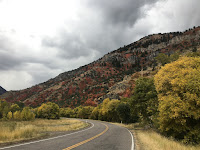 I had about two hours of intermittent sunshine, and I made the most of it with the beautiful drive and several short walks.  I sure wish Debbie was here to see this – it's far better color than in the previous years we've seen.  Hopefully we'll see it again another year.  One thing I noted yesterday is that several species have yet to turn color – most particularly the quaking aspen, who have just barely begun to lose their green.  In another few days they should reach their peak – maybe Debbie will get to see them!
Posted by Unknown at (permalink) 6:57 AM