Paradise ponders: stairs and sunken gardens edition...  Our friend Michelle H. has recently refinished a garage into a usable family room.  There was a challenge in that job: the floor of the new family room is 31" lower than the floor of the main house.  To handle that, her son-in-law built a set of stairs for her – but those stairs were somewhat less than perfect.  They're way too tall (each stair is 10 1/2" high), and the top and bottom stairs are at different heights.  A few days ago her son tripped and fell down them (he's shaken, but fine), so she finally decided to take me up on an offer I made her long ago: to build her a new set of stairs.

So yesterday I ran up to Home Depot and picked up the materials.  They still carry the oak stairs I mentioned yesterday, so with those, a couple of 2x12s, a 2x10, and a few hardware bits, I went to work.  The first photos below shows the pieces I sawed up (2x12s sawed on all four sides) for the risers that hold the steps up.  After that I did lots of routing to make sturdy glue joints, giving my router table a real workout.  This project would have been a lot harder without that table!  The second photo shows the first glue-up, for the tallest step.  The last photo shows the second glue-up, for the next lower step.  Once that dries, I'll be gluing those two steps together, and then gluing up the next lower step.  It's fun to be doing some woodworking again! 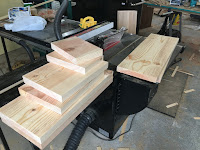 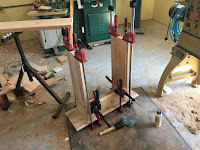 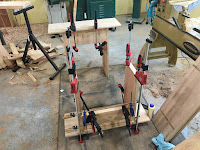 Our sprinkler project ran into a problem yesterday.  Mark, our contractor, discovered that we have wooden joists holding up the sun room floor – and that the lovely grade he'd just finished putting in caused the soil level to rise unacceptably close to those joists.  This puts us at risk for various kinds of deterioration issues, most especially with wetness (including from snow piled against the house).  We need to lower the soil a foot or so in the area immediately surrounding the sun room (the main house's floor level is 18" higher, so it's not an issue).  He came up with an idea for accomplishing that, and both Debbie and I really liked it.  He's going to dig out the area between the sun room's foundation and about 4' out, down to a point about 12" deeper than the surrounding soil, making a sunken garden perfect for flowers.  Then he's going to install a short retaining wall around that sunken garden, made with natural rock.  That work will start today, but it will take several working days to complete (including the challenge of getting the roughly four tons of rock delivered here).  It's always something, isn't it?
Posted by Unknown at (permalink) 8:37 AM