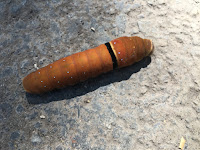 Paradise ponders: orange caterpillars, finished project, shocking breakfast, surprise visitors, delicious dinner, and beautiful morning edition...  Yesterday afternoon, while walking from our barn to our house, I spotted this caterpillar walking across our pavement – moving at a good clip, too!  It's roughly the size of my thumb, quite large for a caterpillar.  Thanks to the wonders of Google's image search, I was quickly able to identify it: it's the caterpillar of the Western Tiger Swallowtail butterfly (Papilio rutulus).  More particularly, it's the caterpillar just prior to pupation – about to hibernate while it transforms into the adult butterfly.  Prior to this life-cycle stage, the caterpillar is green.  The Western Tiger Swallowtail is a fairly common butterfly here, and we recognized its photos immediately – but we had no idea it's caterpillar looked like that! 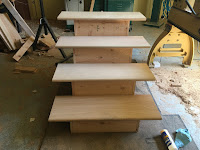 I was walking back from the barn because I had just finished the stairs for Michelle H.   I'm really pleased with how they turned out, and so is she (though so far she's only seen the photo).  Michelle will be over in the next few days to do some staining and polyurethane finishing, and then I'll go over and help her install them.  Hopefully they'll fit properly! 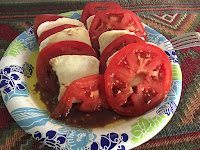 Yesterday afternoon Debbie started our dinner, but it was going to take over an hour and I was hungry.  I looked around for a snack and saw (a) a lovely ripe tomato, grown by Michelle H., sitting on our counter, and (b) some leftover fresh mozzarella cheese.  Ah ha!  A few minutes later, I had the dish at right – a little olive oil, some balsamic vinegar, and that tomato and cheese.  Debbie had already eaten her share of the cheese, so I hogged this whole thing down myself.  Delicious, it was!

Shortly after I finished that, a couple we didn't know drove into our front yard.  I was up on our balcony, so we talked for a moment and I found out they lived nearby, loved our barn, and wanted to know who had built it.  That led to a delightful four hours of conversation (after a tour of our place) during which we got to know Ben and Laura.  They live about a quarter mile southwest of us, on the fields just above the east side of the Little Bear River.  Ben is a firefighter, a civilian employee of Hill Air Force Base, near Ogden (about an hour's drive).  Laura is an entomologist, working for the Utah State University in Logan, specializing in agricultural pests.  They moved here the year after we did, and still don't really know very many of the local folks.  We made a start on fixing that yesterday. :)

That lovely visit delayed our dinner by a few hours, and made me very glad I'd had that snack!  Not long after Ben and Laura left, our kitchen was full of the enticing aroma of baking cod.  Debbie had purchased two pounds of fresh cod from Macey's, and it needed to be eaten.  She coated the fillets with egg and a spice mix, baked them until they practically fell apart, and then we feasted on that cod and some perfectly cooked white rice.  Cod fixed that way is a favorite of both of us, and last night it was particularly good.  But oh, man, were we ever stuffed! 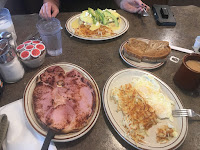 Before sunrise this morning we headed up Blacksmith Fork Canyon, hoping to spot some moose like we did about a week ago.  No luck with the moose this morning, though we did see quite a few deer, two kingfishers, and a chipmunk zipping across the road.  After our drive we headed up to Angie's for some breakfast.  The special was a bone-in ham steak and eggs, so I ordered that.  Debbie ordered the “Florentine Eggs Benedict”, a concoction that is meatless, but has hollandaise sauce and avocados.  When our waitress delivered the meal, I was shocked into speechlessness by the sheer heft of that ham steak.  I hope you can get a sense of the scale of that thing from the photo - it was about 3/8" thick and about a square foot in extent.  I stuffed it in until I could stuff no more, and I didn't even eat half of it.  I never even touched the homemade rye toast that I love.  Debbie was even less successful in the consumption department than I was: she could only eat half of her relatively tiny little dish.  We walked out with about two pounds of food in boxes, after we stuffed ourselves to the bursting point.  Our dogs will be forever grateful to Angie's for doing that, as they got to eat all of the (lavishly) buttered toast and ham.  Debbie's Florentine Eggs Benedict she's going to try reheating, but I won't be surprised if it ends up as a dog treat, too.  :)
Posted by Unknown at (permalink) 11:04 AM