Paradise ponders: good news and bad news, this and that edition...

Paradise ponders: good news and bad news, this and that edition...  Sunday afternoon, after I finished my bookkeeping, I found myself alone in the house with four dogs who desperately wanted some attention.  So I leashed up the two little ones (Cabo and Mako) and we all went walking up the dirt road leading east from our driveway.  The two photos below were taken along the way, but the highlight of the walk is captured in the video at right: butterflies.  Hundreds upon hundreds of yellow butterflies, feeding from the 200+ acres of alfalfa around us that was in bloom, and getting minerals from the water seeping up on the drying dirt road.  At points in the walk I was in the middle of a cloud of butterflies, so many that I often felt their wings beating against my arms or my cheeks.  The dogs (Cabo, especially) went sort of crazy for a little while, trying to catch them – and then suddenly they just gave it up as a lost cause and simply ignored the butterflies all around them. 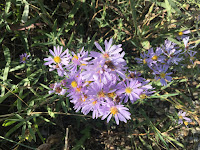 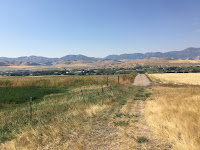 Sunday evening we all played some games: the Mexican train game, and a card game called Skip-Bo.  The two photos below show a Mexican train game in progress.  The lovely lady in the first photo is Michelle, Jimmy's wife (and Jimmy is the sap at left).  I lost the game, badly.  :) 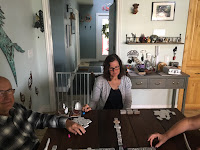 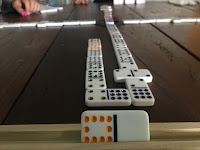 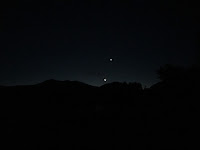 Monday morning I was up before sunrise, and headed out to give the doggers their morning constitutional.  I walked Mako and Cabo first, and those two basically dragged me around the alfalfa field.  Afterwards I got Miki and Race, and we had a much more sedate walk – to the point where I dared take out my phone to snap a photo of an interesting conjunction in our eastern skies.  If you click the photo at right to embiggen it, you'll see an out-of-focus crescent moon with the “dark” side well-lit by earthshine, and Venus above and to the right of it.  Just below Venus and slightly left you can just barely make out another planet: Mars.  Quite a show of solar system objects for one small section of the sky!

Sunday afternoon I mounted our cutoff switch into the oak panel we'd glued up the previous day – that went perfectly, and now our electrical box is very securely mounted in a proper way.  So yesterday morning (Monday), Jimmy and I went right to work on the cedar tongue-and-groove ceiling.  Despite a slew of interruptions, we made substantial progress – about a third of the ceiling is now sheathed. The first photo below shows the initial three runs; the second where we stopped for the day.  We installed the first three lights after we got by their junction boxes.  That cedar is going to make a beautiful ceiling, especially after it goes gray.  Once it reaches that stage (probably at least two years), I'll put a coat of flat polyurethane on it.  We did have one small oopsie along the way: the escutcheons for light fixtures don't quite cover the square holes we cut in the cedar.  Dammit!  But Debbie had a wonderful idea for how to fix it: we're going to get the folks at Lazy K Wrought Iron to make us some ornamental plates to go between the light fixture and the cedar.  These will be donut-shaped, with the outside diameter big enough to comfortably cover the square hole, and the inside diameter small enough to be hidden inside the fixture.  Perfect! 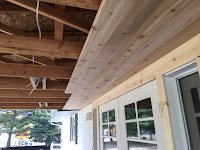 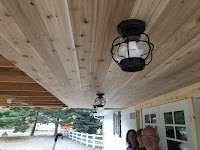 While Jimmy and I were working away on the deck, a small army of sod workers descended on our yard.  At one point there were six people working hard at it.  The sod truck (ginormous!) delivered the sod around lunchtime, and from then until around 8 pm this group slaved away.  The truck delivered about 10,000 sq ft of sod, and every square inch was laid by the time the team left.  Almost all of our front yard is now under sod, and about 1/3 of the back yard.  Photos of the sod part of the day below... 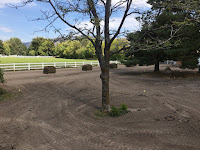 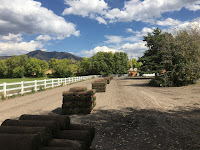 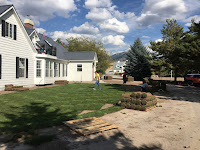 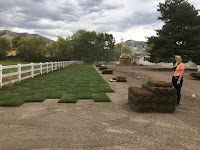 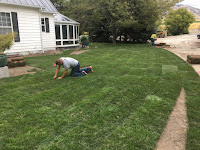 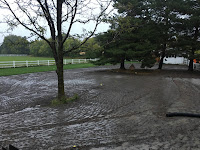 So ... if you've read this far, you might be wondering what the bad news is.  Well, take a look at the scene at right: our back yard this morning.  We had a 50% chance of 0.2" of rain in our forecast for last night.  As of 8 am this morning, we've received 100% of about 1" of rain.  We're soaked.  This means that the sod truck (which has to drive across an alfalfa field) can't deliver.  Even if he could, the workers can't lay sod on soupy mud.  The deck is wet, so Jimmy and I can't safely work.  It's still raining as I write this, though the end appears to be in sight (judging from the radar).  Argh!
Posted by Unknown at (permalink) 7:37 AM