Paradise ponders: the all-kinds-of-stuff, catch-up edition...  Seems like ages since I've had a few calm minutes to sit down and blog!

Jimmy and Michelle made it back to the airport for their trip home on Saturday, after a stop at the Red Iguana for yet another outstanding meal.  We had a fifth person with us: Jay G. (more on him later), who hails from Michigan and was unfamiliar with “real” Mexican food (Taco Bell was most of his previous experience).  Because he was unfamiliar with the items on the menu, we helped him order: chicken tamales smothered with his pick of the mole sauces.  His surprised smile when he tasted the first bite was priceless. :)  There were not many molecules of deliciousness left on his plate when he was finished!

Last week Michelle and Debbie made a wonderful b'stilla (a traditional Moroccan delicacy, a kind of sweet and spicy chicken pie).  I mentioned this in a previous post, but failed to post the photos – I've fixed that below.  The two of them were disappointed that the phyllo dough didn't hold together, but Jimmy and I couldn't have cared less: it tasted great, and brought back fond memories of a restaurant in San Diego, long out of business... 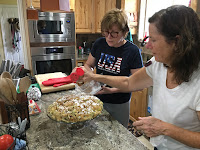 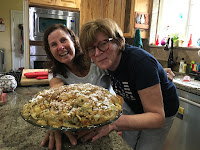 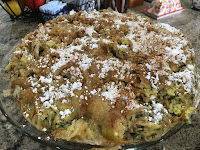 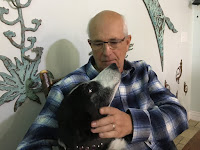 Speaking of Jimmy (aka “the goat”): here's a snap of him and our border collie Race, who milked every bit of attention from both Jimmy and Michelle that he could get. 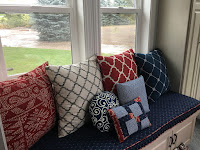 Sometime last week, our friend Michelle H. showed up with pillows for our mud room.  She made these for us, after she and Debbie picked out a bunch of different colored cloth to make them from.  They're beautiful!  The photo at left shows half of them; the bench on the other side of the mud room is similarly pillow-equipped.  The pillows also fixed a color problem that Debbie had with the mud room – the color of the new cabinetry didn't go well with the color of the floors and walls, and somehow the pillows were needed to fix that.  Such things are beyond my ken, but Debbie and Michelle were happy with the results, so I'm happy!  :) 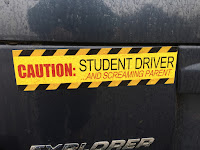 While Michelle was visiting, I walked by her car and saw this bumper sticker on it.  Loved it! 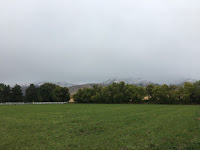 On one of our rainy days last week, we spotted the season's first snow on the local mountains – it's just visible under the cloud bottoms on the photo at left.  There's a lot more snow up there today, as you'll see in a photo below...

Friday was quite hectic for our contractors putting in the sprinklers and sod: rain was due Friday night, and they were scrambling to get the sod all laid down in time.  They did it, but only just: the first rain started just as they finished.  By this morning we've had over an inch of rain fall here, and the newly sodded areas are thoroughly drenched. The first photo below shows one of the trucks that delivered our sod (three loads in all).  The truck is too big to get into our driveway, so they drove through our hay field to get as close to our house as they could, then drive a couple hundred yards with a fork lift to deliver each pallet of sod.  Each truckload delivered 28 pallets of sod; we used 62 in all.  The center photo shows the dogs on their first outing onto the sod-covered yard.  For the first ten minutes or so, there was non-stop sniffing by all five dogs.  After that, they started into the hard-core playing (especially Cabo and Mako, the younger two).  They played so hard that they've been flipping up corners of the laid sod. :)  All of them love their new back yard!  The last photo is from this morning, looking at our back yard: nicely smoothed, gently sloped for good drainage, and (for the moment) free of anything even resembling a weed.  The color differences, I'm told, come from the fact that the sod was cut from different parts of the field, with different exposures, soil types, etc.  That should all even out by the middle of next season.  Mark (the contractor) tells me that I'll likely need to mow it next week.  Amazing! 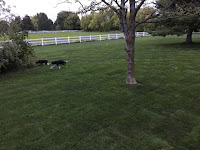 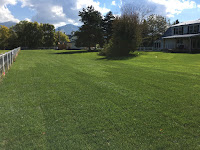 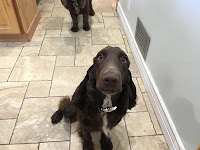 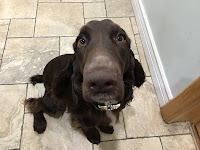 The fellow I mentioned earlier (Jay G.) was here on Saturday because he flew in from Michigan with our new field spaniel, Ipo.  He stayed with us on Saturday night, and we took him back to the airport yesterday for his trip home.  Ipo was an absolute sweetheart from (literally) the first moment we spotted her.  As I walked from the car to the curb to greet Jay, Ipo jumped up to investigate me, all curious and bold – but very gentle and respectful.  When we got her home, we introduced her to our other four dogs one at a time, out in the yard – no problems at all.  Within just a few minutes, she was bounding around our yard with all four of the others, and joyfully roughhousing with Cabo and Mako.  We've had a few minor tussles, always between Ipo and Mako, but they got it all straightened out by themselves in just seconds.  If you've had any experience with adult dogs meeting new adult dogs, you know that's about as good as it gets.  By this morning they're all acting like they're in the same pack – just wonderful from our perspective.  That's Ipo in the two snaps at right.  She's slightly larger than Cabo, quite a bit smaller than Mako; darker brown than they are in overall color, with a nice big white patch on her chest.  Her face is longer than Cabo's, narrower than Mako's, and her shoulders and thighs are narrower than either of them.  She's fast, clearly smart, very confident (in both personality and physicality), and graceful.  We've had her with us for two nights, working on our bonding, and she's been most respectful of us – but also occasionally (during the night) coming up to see us for some reassurance.  She's had three homes in the last two months, so we're paying a lot of attention to making her feel confident of this one – her last one, though we have no good way to tell her that.  Debbie and I are a bit surprised that even though we have four field spaniels, they are four very distinct animals, both in appearance and in personality.  There are no problems telling this group apart! :) 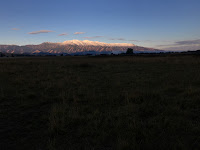 I'll leave you today with a photo I took this morning.  I was driving to our vet just before 8 am, to drop off Laki for a couple of minor surgeries.  I had to stop to capture this: the Wellsville Mountains in the early morning sunlight.  This is the sort of display – common here – that causes Debbie or I to say: “We live in a postcard...”  Indeed we do...
Posted by Unknown at (permalink) 11:14 AM