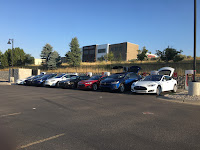 Paradise ponders: total solar eclipse, a new dog, a new (to us) eatery, and feeling punky edition...  Debbie and I drove up to a point just south of Rexburg, Idaho yesterday to view the total solar eclipse.  We left at 5:30 am on Monday morning, allowing six hours for a drive that normally takes three hours – this, because of the news reports of apocalyptic traffic conditions.  Well, there was basically no traffic at all, and we arrived in Idaho Falls by 8 am.  Since we were so early, we decided to top off our battery at the supercharger there, and grab something to eat at the Kool Beanz shop nearby.  We were in for a surprise, though – all the charging positions were occupied when we got there (see photo at right)!  As we'd never seen more than one other Tesla at this supercharger before, we were more than a tad surprised.  There was one other guy waiting when we drove up, and another drove in after us – so for a while there were 11 Teslas at this fairly obscure supercharger at once.  It was kind of cool to see so many Teslas in one place.  :)  We ended up waiting for perhaps 10 minutes, and then we slid in and charged up.

While we were still waiting for our food at Kool Beanz, Clay M. (a friend and fellow engineer for over 25 years) texted me, wondering where we were.  He and his daughters had left Ogden at 6 am, headed for a rendezvous with us near Rexburg.  But he was in Idaho Falls, and decided to meet up with us in Kool Beanz.  As Debbie would say, “Cool beans!”  Within a few minutes he was there with us, and though we hadn't seen each other for about four years, our conversation picked right up as though it was just four minutes.  His daughters were a bit for me to absorb, though, as I hadn't seen them for about 16 years.  They were toddlers then, but most definitely not toddlers now.  It's great that they wanted to take this trip with their dad. :) 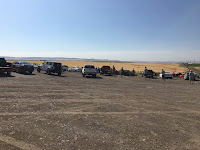 After refueling us and our car, we headed out to our spot near Rexburg.  I had picked a spot in the middle of some potato fields that was 20 miles or so off the freeway, hoping for less of a crowd.  I was actually expecting to be basically alone; Debbie was expecting a huge crowd.  We were both wrong. :)  As we turned off the U.S. highway onto back roads, we noted people selling parking places for $20 a day, and plenty of people with cameras and viewing glasses ready to watch.  The further we got away from the U.S. highway, the fewer people – but even when we reached our chosen spot, there were still 30 or 40 people nearby.  We parked right where we'd picked, but before we could even get out of the car a sheriff told us we couldn't park there, and guided us to a spot a mile or so away.  There, in the equipment yard of a local farmer, we parked for free with about 20 other cars.  It was a happy, well-behaved group, complete with a friendly chocolate lab, probably the next best thing to being completely alone.  The photo at right shows about half our “crowd”... 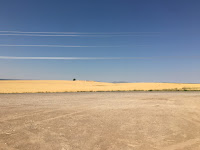 We had plenty of time to watch as the moon's disc started sliding over the sun.  Before totality we were using the Celestron 10x25 Solar Binoculars we picked up a few weeks ago.  These worked great, giving us a particularly clear view of the progressively larger “bite” the moon was taking from the sun.  We could also see several sunspots.  Though the sun's light was slowly being extinguished, it wasn't really noticeable until about 10 or 12 minutes prior to totality.  At that point so much of the sun was blocked that it was obviously darker, and the temperature started to go down.  The photo at left was taken during this period.  The silvery horizontal lines you see are aluminum high tension wires.  As you can see, there's really not much difference between that and full daylight – we only noticed it, I think, because it was so much less light than just a few minutes prior.  As we got very close (within three minutes or so) to totality, the atmosphere got a bit eerie.  Debbie and I were both reminded of the same thing: the lighting as a storm approaches, or as you emerge into the eye of a hurricane. 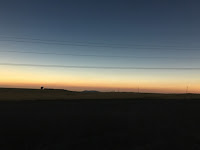 And then there was totality.  The transition to totality was quite sudden, a switch flipping day into dark.  In totality the only light in the sky is from the sun's corona and any visible solar prominences.  I didn't even try to take photos of that, as I don't have the right equipment for it.  I just enjoyed being able to see it.  Debbie and I switched to conventional binoculars (stabilized, though) and had a couple minutes of just spectacularly good viewing of the event.  Details – streamers, especially – were readily visible.  The corona has an ethereal appearance, ghostly and insubstantial.  I could also see two solar prominences, bright orange, and much, much smaller than the corona.  Debbie was able to make out three of them – she has better eyeballs than I do.  So beautiful, it was!  I did take a moment to snap a photo of the scene to our west (at right, above).  The orange band stretched 360° around us, so it didn't really look like a sunrise or sunset.  And it really was quite dark!  The temperature dropped perhaps 10 degrees. 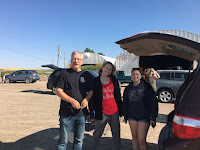 It was fun to hear our little crowd reacting to the eclipse.  As totality approached, the normal conversational ruckus died down.  At that point we mostly heard exclamations of surprise and happiness.  At the moment of totality there were quite a few of these, including some we hardly ever hear where we live (such as one very clear “Holy shit, dude!”) :) The video at left was taken during totality by one of Clay's daughters.  At right is Clay with his daughters (Sydney and Shayla), and Debbie in the background watching the moon eat the sun.

Then it was over, and all too quickly.  Personally, I'd have liked a few hours of totality – but there would have to be significant changes in the Earth-Moon-Sun relationship for that to happen, and the side effects would be bad. :)  We took off to go back home, planning to stop by the Idaho Falls supercharger one last time to top off.  We had only driven a couple of miles from our observation point before we noticed the first odd thing: Google Maps was routing us along back roads instead of the U.S. highway.  A quick look at the traffic data showed a solid red on the U.S. highway – and on I-15, which we had to take to get home.  Uh oh.  It took almost an hour for us to get into Idaho Falls, instead of the 30 minutes we expected.  We topped off our car and headed for the I-15 – but just getting onto I-15 took over an hour (instead of the usual 10 minutes).  And things pretty much went downhill from there.  Our speed on the freeway ranged from zero (for as much as 20 minutes) to about 60 mph (for short bursts only).  We were well south of Pocatello before we finally were at a steady speed, and we only hit the speed limit for the last few miles before we turned off for Logan on U.S. 91.  After that we were at full speed, and oh-so-happy to be out of the traffic that we're so unfamiliar with these day.  I have to note that the Model X made the traffic much easier to deal with, though.  I turned on the automatic speed control, and it handled all the accelerating and decelerating on its own.  All I had to do was hold onto the steering wheel, which was easy as I was so tired I needed the support!

Debbie and I stopped to eat at a place that opened a couple years ago, but which we'd never stopped in at: Jim's Grill, in Smithfield.  We were greeted in a very friendly way, seated immediately, and we ordered our drinks (beer for Debbie, strawberry lemonade for me).  With our drinks, our waiter brought rolls.  My lemonade wasn't great, an in particular was way too sweet for my tastes.  The rolls were good, but not a standout by any means.  Debbie reports that her beer was excellent.  My initial experience with the drink and roll lowered my expectations considerably – so I got a very pleasant surprise indeed when the entrees showed up (photos below).  At left is Debbie's order of three shrimp tacos.  Darned near as big as she is, and they looked scrumptious.  I got one small bite of her third one; all the rest she shoveled into her face at breakneck speed, all the while a huge smile on her face and yummy noises emanating from somewhere inside her.  My fish and chips (at right) was hands-down the best I've had in Cache Valley.  The nearest I've had that's better is at Sea Bear's in Ogden.  They served it with malt vinegar, lemon, and tartar sauce, covering all known bases.  The cole slaw was notable for me, as it's sauce was just the way I like it: very slightly sweet, and not overpowering the cabbage.  Even the “chips” were great, and (this being northern Utah), of course they came with fry sauce! 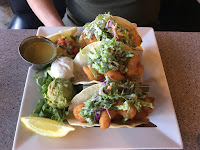 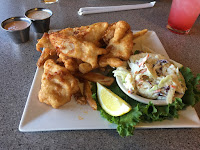 We finally staggered in the door at about 8 pm, and by that point I was just barely able to move.  It wasn't just the exciting day that had me tired: I have caught whatever evil virus got Debbie last week.  I'm about 5 days behind her, symptom-wise, so last night was the worst I'm expecting.  I feel a bit better today, and Debbie is most of the way up the recovery curve.  What a day that virus picked to attack me!

This morning Debbie got a message from a field spaniel breeder in Michigan, someone she knows through her dog agility network.  It seems this breeder had a year-old female field spaniel returned by the person who bought her – and the breeder is having trouble finding a good home for her.  She reached out to Debbie to see if we'd be willing to take her, and long-story-short, in mid-September there will be yet another dog living in our household.  This one is tentatively named Ipo (Hawai'ian for “sweetheart”), and she'll be arriving by air with the breeder's husband, checked on as a service dog (this avoids most of the risks of checking pets as cargo).  That will give us a total of five dogs (four of them field spaniels), with three of them being roughly the same age...
Posted by Unknown at (permalink) 1:40 PM