Paradise ponders: anniversaries, culverts and muddy yard edition...  Today is our 36th wedding anniversary.  I'm a lucky guy to have my beautiful bride put up with me for that long! 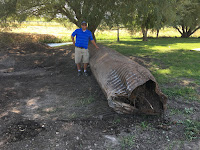 The funny-looking guy at right is Mark T., my sprinkler contractor.  A big part of the job he's doing is to fix the problems in our yard that would prevent a nice, attractive lawn from being installed.  One of those problems was a giant steel culvert-to-nowhere that was about 3/4 buried near the southern end of our yard.  We have utterly no idea why this ugly steel culvert was there – there's no purpose for it that I could even imagine.  My best guess is that some former owner of our property decided to dispose of it there.  At a guess, it weighs between two and three tons, mainly because of all the wet soil that's nearly filling it.  It's so heavy that neither his skid-steer nor my tractor can lift it – all either of us can do is roll it around.  So he's going to have one of his employees cut it into sections (we'll try two, and if that's not small enough then four), tip them up on end, and get the dirt to fall out.  Mark had an ear-to-ear smile pasted on when he told me of his success – this because the evening before I had voice my skepticism that he could do it. :)

Our back yard has now been leveled and raked with a machine called a Harley rake (much like the one in the photo at right).  One of his employees is fixing a leak right now, but when he's done we're going to light off all the sprinklers in the back yard and soak it really well.  Then we wait for things to settle, and Mark will start hauling dirt to adjust the level to our liking.  Then we soak it again, fix any settling issues, and lay sod.  When that sod goes down, it will be the first time this year our back yard looked green!
Posted by Unknown at (permalink) 2:03 PM