Paradise ponders: mysterious fuses, fishy conduit, and lobster roll edition...  Yesterday I installed about 20' of 1/2" PVC conduit between the junction box where the irrigation wires come into my cedar shed and the power sub-panel on the other side.  In addition to the 20' of conduit, there were four 90° “sweeps” (elbows with a roughly 6" radius).  Once the conduit was installed, I needed to pull the cable through.  The first step in that operation was to push the “fish” through – and that meant using my new fish, purchased recently to replace my old and dying one.  My old one was of a type I've used for 30 years or so: a dozen 3' long fiberglass rods that can be screwed together to make a rod up to 36' long.  Those rods are reasonably flexible, and can be pushed through a conduit fairly easily.  My new fish is quite different.  It's 100' of plastic “wire” that's fairly stiff, bends easily over a small radius (as little as 2"), and is very slippery.  I was very interested to see how well this worked compared with my old fish.  Answer: it works very well indeed!  I had that fish pushed through 20' of conduit with four 90° bends in about 60 seconds.  In the first photo below, you can see the bright green fish poked into the conduit in the lower right of the electrical sub-panel.  The second photo shows the other end, in the junction box, and taped to the end of the wire I was ready to pull through the conduit.  Pulling the cable was a piece of cake – another 60 seconds or so.  The hardest part turned out to be fastening the wire to the fish! 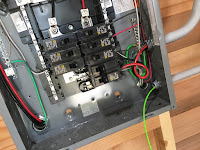 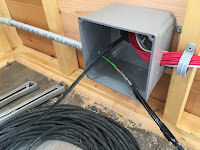 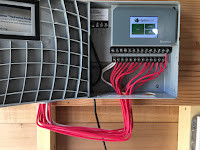 In the second photo above you can also see the 13 red wires for the irrigation zone valves, and the two ground wires (7 zones one one, and 6 on the other, for reasons I don't really understand).  The zone valves draw 220 ma when they're turned on, and only one at a time is ever on.  Those wires are 14 gauge solid copper.  The furthest valve is at the end of 720 feet of wire, so the voltage drop is about 0.8 vac from the nominal 24 vac supply – well within the operating range of those valves (they're good down to 20 vac).  The photo at right shows those wires as they connect into the irrigation system controller.  When we've finished the back yard irrigation system, every last one of those 24 zones will be connected...

My last blog post told how I wired around the fuse that blew in my brother Scott's air conditioning system.  That post got a comment from someone who sounds authoritative, basically advising me to get that fuse wired back in and replaced.  Yesterday I did that, buying some fuses at Home Depot and undoing the bypass I had made the day before.  I still don't know why both a fuse and a circuit breaker are needed, though.  Maybe someone can explain that to me... 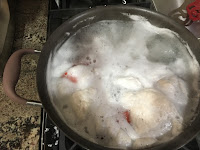 We went grocery shopping at Macey's yesterday, and they had laid out about 100 frozen Maine lobster tails.  The frozen tails aren't quite as good as the live lobsters, but they're relatively inexpensive ($5 for an 8 ounce tail) and still darned good.  So we bought four of them.  When we got home, I plopped them in some cold water for about 15 minutes to thaw them, then boiled them for 4 minutes (photo at left).  I chilled them in ice water for 10 minutes, then picked out the meat, chopped it up, added some mayonnaise, lemon juice, and finely chopped green onions, and voila “dash” we had the hard part of a lobster roll.  Real buns for lobster rolls are unobtainable out here, but they had something that substituted quite nicely: a flat loaf of potato ciabatta bread.  I cut that into roughly 1" wide pieces, then made a cut partway through the middle of each – the bread was very nice, and it made a perfectly serviceable lobster roll.  Then, of course, we shoved them into our faces just as fast as we could swallow! :)  We had some wonderful fresh sweet corn on the cob as our accompaniment.  Yummy, that was!

Later in the afternoon we re-watched one of our favorite movies: The Shawshank Redemption.  It's probably been five or six years since we last saw it, so many of the details we'd forgotten.  Also, as usual, we picked up on more little details this time through.  That movie has so many shocking emotional lows that I'm very glad it ends on a high and hopeful note.  That movie was (mostly) filmed in an old reformatory in Mansfield, in north central Ohio.  I only know this because in 2008 I went on a business trip to Mansfield, and my hosts there invited me to go tour it.  Tourism to the reformatory and the oak tree made famous in the film are quite a big business for Mansfield...
Posted by Unknown at (permalink) 7:53 AM