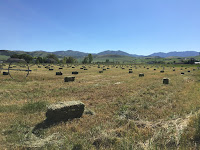 Paradise ponders: potted plant, vanishing power cords, and oodles of hay edition...  At right is our south field as of yesterday evening.  Scott N., the fellow who leases the field from us, cut and baled the field earlier in the week.  That's more hay extracted than we've ever seen come off that field, and by a pretty good margin (close to double the previous best yield).  There are two reasons that I know of for that.  First, we had a lot of rain early in the season.  Second, because he was so busy with the other fields he leases, Scott was quite late getting to the mowing of our field.  The grass in our field was over 3 feet high when he finally mowed it down.  That translates into lots of bales of hay!  I saw Scott while he was baling and gave him a wave; he waved back with an ear-to-ear grin.  :)

Debbie and I spent yesterday and today mainly working on getting plants in place on our porches and our balcony.  We've got a total of nine big pots in three places.  Five of them are on our balcony (photos below).  We put drip irrigation onto these pots.  There's a hose bib almost immediately under the balcony, but we didn't want to have an ugly hose showing against the side of the house.  To solve that problem, we ran the hose up a gutter rain spout – that worked great!  The hose pops out of the gutter a mere 6" from where we needed it on the balcony, and the bottom side is hidden by shrubbery.  Perfect!  The drip irrigation is visible in the photos below, but it's hard to see... 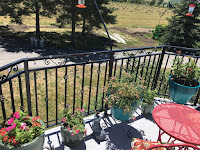 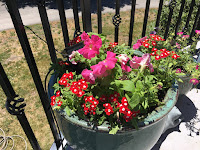 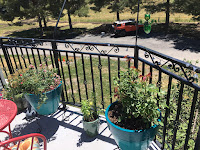 Yesterday I tackled a project that's been in the queue for quite a while.  We've got a couple of “bug lights” in the house to combat the box elder bugs, house flies, and yellow jackets that wander into the house through various means.  These lights are what restaurants use to keep flies down.  They're ultraviolet lights (to attract bugs) with flypaper immediately below them.  It's kind of amazing how well such a simple thing works – we put them up last year, and after about a week we basically never see bugs any more.  The one drawback to them is that they require a power cord.  Our original installation had the power cords dangling straight down to an outlet, which means that we had a power cord stretched out against the wall – not exactly the most attractive thing.  Last week I had an idea of how to fix that, by installing a new outlet box right behind the triangular art deco bottom part of the light fixture.  That part happens to be just barely big enough to hide a one-gang outlet box, and it's also hollow so the cord could be tucked into there.  Below you can see the finished results: the power cords are gone, and the means by which I accomplished that are completely hidden from view.  Win! 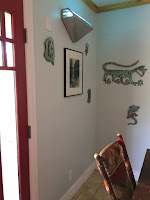 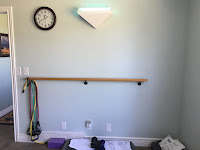 Debbie's been decorating our sun room, even as the cats get more and more comfortable in there.  Some photos for you: 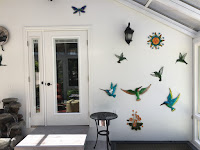 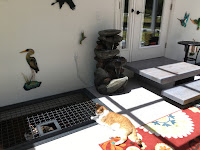 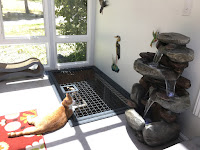 We eagerly anticipating the arrival of a friend we haven't seen for several years: Aleck L.  He should be here later this afternoon, and he's staying through mid-day on Sunday.  I met Aleck when we worked together at ServiceNow about eight years ago, and we've had a delightful friendship since then.  While we've been frequently in touch with him, we haven't actually seen Aleck for over three years now.  It will be great to have some time with him!
Posted by Unknown at (permalink) 1:37 PM