Here's something to ponder for a while...

Here's something to ponder for a while ... Internet penetration across the U.S.  It varies in ways that I find surprising and not immediately explainable.  The map is from this WSJ article.  There's a very high penetration both where we used to live in Southern California, and the semi-rural place we live now in northern Utah.  But where my sister lives (near Charlottesville, Virginia) is a relative Internet desert, and I don't really have any idea why that should be.  Then there's southern New Jersey, where my parents used to live – it has no data.  WTF, New Jersey?  The part of North Carolina where a good friend of mine lives (near Asheville) rather closely resembles the nearby Charlottesville, Virginia area – and yet there, the Internet penetration is high.  What on earth is going on here?  The WSJ article portrays this as largely a rural/urban divide, but their own map belies that.  I see lots of farming areas with high penetration, some with adjoining areas of low penetration.  My first instinct is to be suspicious of the quality of the data underlying this... 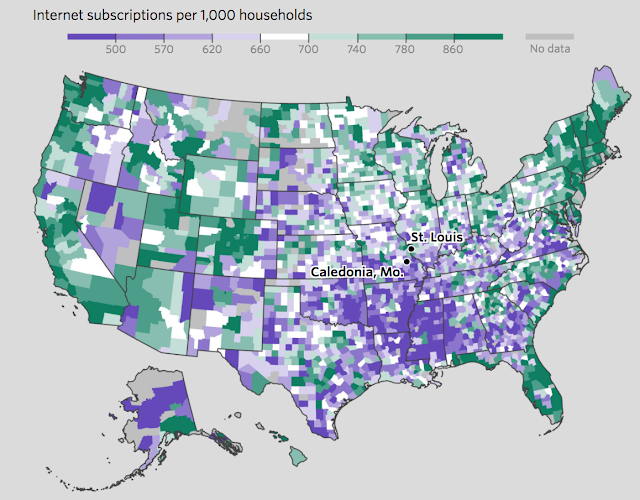 Posted by Unknown at (permalink) 4:40 PM