Working on the big box...

Working on the big box...  It's really a way to elevate my dovetail jig, but it will look like a big box, anyway.  I ran into a slight problem with my box-building plans yesterday.  My original notion was to cut dovetails into the sides of the big box using the dovetail jig itself.  That would have the dovetail jig “bootstrapping” itself into a more capable tool.  'Twas an excellent idea, but sadly there's a limitation of the dovetail jig that makes that plan impossible: it's limited to wood that's 7/8" thick, and I'd already bought the redwood to build it out of 2x8s (and those are roughly 1 1/2" thick).  Dang it!

Dovetails or fingers are really the “right” way to build this thing – they're by far the strongest kind of joint I could make.  The fallback would be to buy corner braces and install them on the inside corners of the box – doable, but much less interesting than a real joint.  So I decided to make a fool of myself and make finger joints by hand.  I chose 7/8" wide fingers (only because the math worked out nicely) and started with my tail boards (the two short sides of the box).  The first step was to use my bandsaw to cut the sides of the fingers (first photo below).  That was easy enough for these boards, but it will be considerably trickier when I go to saw the pin boards – those pins will have to fit tightly between the tail board fingers.

The next step was to chisel out the holes where the pins will go, between the fingers of the tail boards.  In the second photo you can see the beginnings of the first one I chiseled out, and the third photo shows it finished.  That was a lot of work!  After putting my thinking cap on, I came up with the idea of drilling 3/4" holes right at the ends of the notches I was chiseling out (fourth photo).  I theorized that I'd have much less material to remove via chisel, and it would be easier.  It was (see fifth photo for the results of five hammer blows on the chisel).  Much easier – so easy that I finished the remaining three notches in less time than it took me to chisel just the first one (in the sixth photo)!

The last photo shows my working setup for the chiseling.  I'm using a 3/4" chisel and a dead fall hammer (love those things!).  Just below the chisel in the photo is a diamond sharpening stone; I hone that chisel frequently as sharp is very much better than dull when you're cutting directly across grain as I am here.  The tail board I'm working on is clamped to my workbench, but there's a spoil board under it so I don't gouge my bench when chiseling. 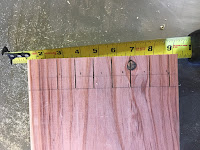 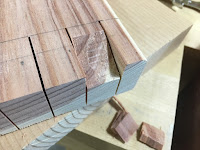 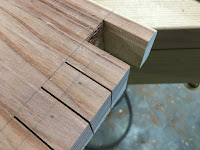 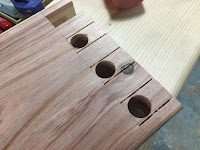 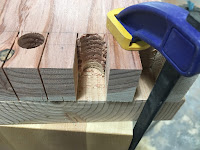 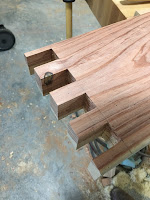 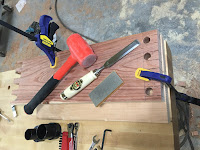