Paradise ponders: small assistants, taper jigs, and new glasses edition...  So, thinking that I had the entire day available to work in my shop yesterday I started out by finishing the assembly of a jig I bought to cut small tapers.  I'd thought it would take just a few minutes to assemble the jig (a kit, naturally).  But I ran into a problem: the extension table for my table saw didn't have the miter run routed out all the way through (you can see this in the first photo below) – it only extended about 1/3 the length of the table.  That caused a problem with the jig, as it rides on a tight-fitting miter bar that you slide all the way through – and it stopped far short of passing the blade.  So ... I needed to route the miter run out all the way through, and the first photo shows my setup for doing this.  That effort worked great except that right near the right-hand side my router bit ran through a pair of steel screws.  What a noise!  I was surprised the bit survived intact, but it did (though it has a couple of nicks in it now that make it much less useful).  That did solve my miter run problem, though.  In the second photo you can see the jig all set up (but not inserted into the miter slot), with a piece of scrap in it for a test run.  The results are in the last photo – a nice, smooth tapered cut.  The main reason I wanted this jig was to let me safely cut wedges for wedged tenon joints, and now I can! 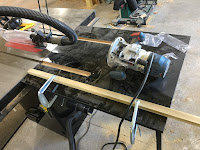 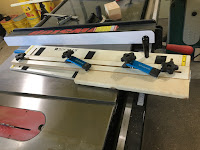 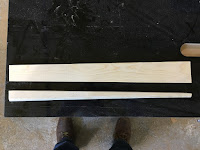 But of course instead of taking 5 minutes to assemble the jig, I spent a couple of hours by the time I got done.  Sigh.

Then I moved on to glue up the first window frame that I'd test-fitted the day before.  Into the clamps it went, and I'll be taking it out of clamps this morning.  After that I routed out the tail boards for the second window frame.  Today I'll be doing the pin boards and gluing it up (I hope!).

Debbie made us a fine salmon lunch, but cooking it differently than her usual baked salmon with dill and mayonnaise.  This time she used the same technique she uses for scallops, just as an experiment.  It was a successful experiment!  :)  Delicious, that lunch was.  I could hardly move when we finished, though.

As we were eating, our optometrist called us to let us know that Debbie's new glasses were done.  We hopped in the car and ran into Logan to get them, and then of course we needed an ice cream cone (since we were up in Logan anyway, don't you know).  By the time we got done with all this, it was almost 5 pm.  Where the heck did the day go? 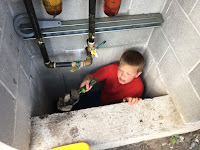 My filling station structure had accumulated some dirt in its bottom during construction; about 2" of Paradise's gluey, clayey muck.  I tried to clean it out myself, but the space is so constrained (32" x 16", and 36" below ground level) that I couldn't maneuver.  I'm just too big.  But that thought gave me an idea: I needed a small person!  Michelle H.'s son Dallon was just the ticket, and she volunteered him for the job.  As you can see at right, he fit into that little space just fine!  He worked hard for a half hour or so, and scooped all that muck out for me.  Now my little filling station is much nicer!

I mentioned a few days ago the problem I discovered with the filling station: the nozzles required some back pressure in order to operate, more than is supplied by the height of the tanks.  The solution I chose was to install fuel pumps, which will provide not only the needed pressure, but a higher flow rate as well.  I received the first pump yesterday afternoon, and it was quite a bit larger than I'd imagined it would be.  So much so, in fact, that I was afraid two of them wouldn't even fit!  So this morning I got out my tape measure to check that out –  and I got lucky: they fit with just about an inch to spare.  Phew!  However, all the plumbing inside the enclosure will have to be re-done.  It's my own fault for not researching those nozzles thoroughly enough.  Dang it.  The folks who did the plumbing for me are willing to re-do it, thankfully.  Hopefully within the next couple of weeks we'll have that done...
Posted by Unknown at (permalink) 9:08 AM