Paradise ponders: drone photos, geysers, cedar sheds, and routers edition...  I got copies of the photos of our place taken by the drone earlier this week.  One of them is at right.  The resolution is a bit disappointing; someone has modified it from the 4000 x 3000 resolution of the native Phantom 3 camera.  West is up in this photo, and north is to the right.  It shows roughly the eastern third of our property.  That's Utah 165 running left-to-right at the bottom, the Hyrum irrigation canal just above it.  Looking at the buildings toward the right, our outbuilding is at the bottom, house in the middle, and barn near the top.  My irrigation contractor had this taken so that he could plot out all the sprinklers accurately.

Yesterday morning Debbie and I went out to our new sun room to enjoy the morning as we drank our tea and coffee.  I looked toward the south and saw something odd.  On closer inspection, it was a geyser – roughly 30' tall, emanating from the south side of our field, about 600' from our house.  I knew immediately what it was: a broken riser on the irrigation line that runs east/west there.  That riser is on a 3" diameter pipe, so it squirts a lot of water.  Most likely a snowmobile broke it off in the winter, and the irrigation company pressurized our pipes on Wednesday evening sometime.  So Thursday morning we woke up to our very own (and quite impressive!) geyser.

That event dictated my morning.  I went out immediately and shut off the valve that controls the water to that string of risers.  Then I assessed the situation, and there was good news and bad news.  The good news was that the riser broke off about 5" above ground, at the top of a piece of 3" PVC pipe, which means I wouldn't have to dig a pit in order to fix it.  Yay!  The bad news was that the valve wouldn't completely shut off the water – so there was still a trickle of water coming out of the riser.  Ordinarily the pipe has to be bone dry in order to glue it, and that wasn't a possibility here.  After consulting with my much more experienced friend and neighbor (Tim D.), I learned that there existed a kind of glue (solvent, actually) that would work on wet pipe.  Off I went to get it, though the nearest source was 20 miles away in North Logan.  Once I had all the parts I sawed the pipe off square, shoved a rag into the pipe to at least slow down the water, glued the new connector on, waited five minutes, and opened the valve to repressurize the pipe.  The glue joint held, and didn't leak.  Yay!

But I may have celebrated too soon.  I discovered shortly afterward that while I was in town getting the magic glue, the irrigation company shut down the lines so that they could repair the numerous leaks.  So I won't really know if my repair worked until the crank the pressure back up.  As of this writing, it's still off.  We may have a repeat geyser! :)

I spent most of my remaining day cleaning up a bunch of little details on the changes I've made with our network recently – especially the “heart transplant” that was replacing the routers.  I've mentioned before that I chose the MikroTik RB1100AHx2, a very capable box for a mere $350 – less than I used to pay for Cisco's annual firmware license!  After spending 15 hours or so working with this thing over the past few days, I'm ready to give it a grade.  I'll give it a solid “A”.  It's got far more capability than anything but the most loaded-up Cisco router, for a tiny fraction of Cisco's price.  The hardware fully delivers on its promise of gigabit performance on 13 ports.  It's far easier to manage and configure than Cisco's IOS devices.  The built-in tools (packet sniffer, bandwidth testing, etc.) are simply superb.  For any IT networking tech who isn't fully invested in his CCIE certification, MikroTik's “Routerboard” operating system for routers is a geek's dream come true: ridiculous power that's easy as hell to use.  So far, I have just one complaint: the two fans in it are noisy.  That wouldn't matter if this box were in a server room, but ours are located in our offices, and that noise now dominates the room.  Thankfully, that's easily fixed: I've purchased new fans that make just 1/40th of the noise, and they'll be installed soon. 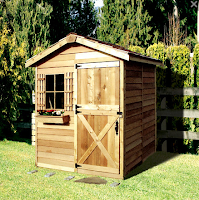 Yesterday a truck arrived with the biggest, baddest kit yet: for a 8' x 10' cedar shed.  The photo at right shows what the completed shed should look like.  Right now, it looks like a big pile of cedar!  :)  This shed will house some of our new irrigation system's components: the booster pump, filters, and sprinkler controller.  It's going on the same concrete slab (behind our outbuilding) that currently hosts our fuel tanks and our backup generator.  That slab has a distinct slope to it, so one immediate challenge I have is to build up a foundation that will correct that and let the shed have a level floor.  I've come up with a relatively easy approach, and I'll be starting on that this morning.  It will involve some precision ripping (of pressure-treated 4x4's); a good exercise for my table saw.
Posted by Unknown at (permalink) 6:29 AM