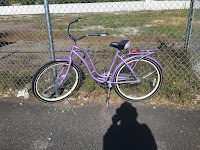 Paradise ponders: bicycles, neighbors, and a whole lotta shed edition...  Yesterday I went to our local hardware store (Ridley's) to pick up some deck screws.  I needed them to attach the steel connectors between the floor beams and the joist-and-floor assembly I finished the day before.  When I parked near the hardware store entrance, I noticed this girl's bike leaning against the fence.  I'd seen it there quite a few times before, so I guessed that it belonged to an employee.  But this time I noticed something that I hadn't noticed before: that bicycle is not locked to the fence.  The lock is there, but it's not being used.  Curious, when I went into the store I asked about it, and sure enough, it belongs to a young woman who works there.  Turns out she's worked there for 3 years, and she's never locked it.  And obviously, it's never been stolen.  This is in the town of Hyrum, which has a considerably higher rate of crime than we do in Paradise, just four miles south.  But ... apparently it's not all that high! 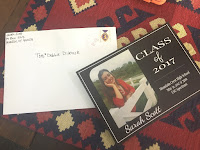 In today's mail we got the card you see at left.  I had no idea what it was, but our friend Michelle H. filled me in: it's an announcement of Sarah's imminent high school graduation.  The card looks very professionally made.  Apparently it acts as an invitation to the graduation ceremony (though there's nothing explicitly about that on the card).  It also is a nudge for a graduation gift. :)  Sarah is a neighbor of ours, so I'm not surprised we were included in her broadcast.  What gave me a really big smile, though, was that envelope.  It's addressed simply to “Tom & Debbie Dilatush”, but the post office had no problem delivering it.  Small town America!

Yesterday and today I've been working hard on the cedar shed, and much progress has been made.  Yesterday Debbie helped me a lot – it was very nice to have the help, but even nicer to see that she could do it.

The first thing I did yesterday was to tap the four floor beams carefully into position, mark the concrete to match, then flip up the joist-and-floor assembly (first photo).  Lifting that sucker by myself was hard – right at the limit of my lifting capacity.  But I did it.  Then I screwed on four connector end caps (second photo), on the side away from the flipped-up floor.  Next step was to secure the four beams onto the concrete slab; I did that with 12 Tapcon 5/8" concrete screws into holes that I drilled into the concrete to match the holes in the four beams (third photo).  They worked great!  I torqued them all down to 25 ft/lbs and those four beams aren't going anywhere at all.  Then I flipped the joist-and-floor assembly back down (amazing how much easier that was that lifting it!), and scooted it over the beams to mate up with the end cap connectors I'd previously installed (fourth photo).  Next step was to lift the side of the floor away from the connectors, prop it up on a log (fifth photo), and install cap connectors on the other side of the four beams.  That done, I lowered the floor and put approximately 3.7 billion screws into those eight cap connectors, along with into six straight connectors along the sides of the front and back beams (sixth photo).  That was a bunch of work! 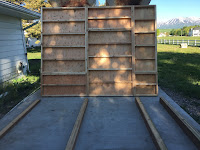 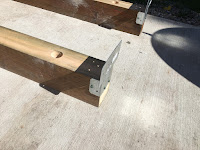 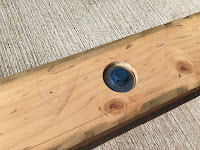 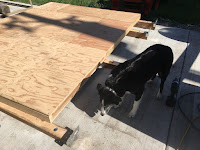 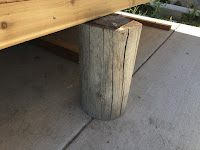 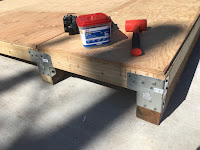 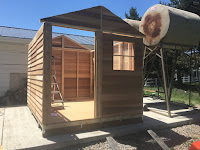 This morning I started assembling the side panels.  There are ten panels all together.  Debbie helped me with this part, keeping panels in alignment while I tacked them into place with a few screws.  When we finished with that, we trial-fitted the door (it was perfect).  Then I put about 2.4 billion more screws in, to tie all the panels firmly to the floor and to each other.  Next step was to install top plates (2x3s) all the way around the top, which did wonders for the rigidity of the longer sides.  Finally I put the two gables up (at right) and put the first two roof panels on.  Those I could do by myself, but the next two roof panels I need help on – and that help is arriving in about 45 minutes, in the form of two of Michelle's strapping sons.  Each of them is much stronger than I am, or was even at their age (late teens/early 20s).  We'll put the next two panels up this evening and I'll tack them into place.  Tomorrow morning I'll put the last two roof panels up on my own, and then all that's left on the shed are details.  Important details, mind you (like the ridge cap), but details nonetheless.