“First chips” on the router table...

“First chips” on the router table...  After several hours of careful assembly, lining up, and tests on scraps, I decided I was ready for the first real use of the router table.  I'm building an add-on for my dovetail jig: basically a sturdy wooden box, 40" wide by 24" deep, and about 7" tall.  This will be clamped on one long side to the top of my workbench, and then the dovetail jig will be clamped on the other long side, about 24" higher than the workbench.  This will let me make dovetails on longer boards, up to about 63" long.  The first dovetail project I've planned has some 54" boards, so I'll need this.

In the process of testing and aligning the router table, I connected my dust collection system for the first time.  When I ran a piece of wood through, I thought there was something wrong – there were zero chips flying around the room.  Turns out that the suction from the dust collection system gets sort of concentrated by the relatively small diameter hole around the router bit (about 2.5" diameter).  This creates a very high speed air flow, so high that no chips at all escape.  That's very sweet compared with a hand-held router that spews chips at supersonic velocities in all directions!  After all the routing I did today you'd never even know I was woodworking – not a bit of sawdust or wood chips on me.

The “bottom” of this box (which will actually be vertical when it's in use) I'm making from 3 lengths of 2x8 redwood.  Ordinarily I would use dowels to align them, just as I did on my recent stairs project.  Now that I have a router table, though, another possibility arises: homemade tongue-and-groove.  First I used a straight 3/4" bit to route the tongue into two boards, with the board down flat on the table (result in first photo below).  That worked great – when I used a micrometer to measure the tongue's width (the critical bit), it was between 0.47" and 0.49" – and I was aiming for 0.48".  Yay!  Then I used a straight 1/2" bit to route the grooves in two boards (second photo), this time with the board up on edge.  The bit held the width to between 0.50" and 0.54" (again, with the micrometer).  I suspect the larger widths are due to my errors in holding the board flat against the fence.  Still, those are actually very small errors.  Then I slopped some glue on them and clamped them up (third photo).  The bags you see are 25 pound bags of lead shot; they're keeping the boards against the pipes to prevent any bowing.

The edges of the three boards are perfectly aligned, notably better than dowel pinning would be when done by hand (I no longer have a dowel pinning jig, though I think I'll end up getting one.  The process of routing the tongue-and-groove was almost effortless by comparison with dowel pinning.  I like... :) 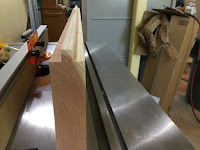 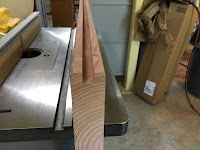 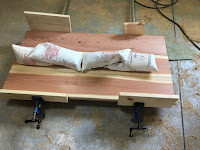 Posted by Unknown at (permalink) 4:04 PM