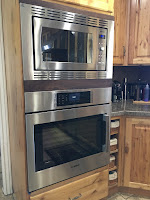 Paradise ponders: router table and sushi edition...  Per a reader's request, a photo (at right) of our new oven, installed.  Above it is the microwave I installed a couple months ago.  Note the walnut trim strip between the microwave and the oven – to our surprise, I didn't need to modify that strip to accommodate the new oven.  The old oven and the new oven are less than 1/16" different in height! 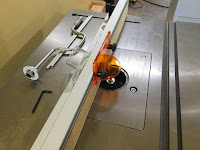 Well, the remaining parts for the router table were delivered on Friday afternoon, as planned.  Yesterday morning I used them to completely finish the router table (at left).  Most of this work was trivially easy, but one part was ridiculously hard.  In the photo you can see a rectangular shaped plate with a circular hole in the middle through which the router spindle projects.  That plate is cast iron (same as the rest of the table), but it sits on four bolts in the corners that are used to adjust its height.  The idea is that you need to match – exactly – the height of the surrounding table.  Well, that's easier said than done!  I found myself making adjustments of as small as a tenth turn on those bolts.  They're extremely awkward to reach, from through a small door in the enclosure underneath the table top.  It took me nearly two hours to get them perfect enough to make me happy.  Those bolts have jam nuts on them, but I hope they don't move!  The crank handle at the left top engages with a nut visible just to the right of the router spindle.  Turning that nut slowly raises and lowers the router assembly.  This is a very nice way of setting the height of the bit.  Overall I'm very pleased with this router table: it's solid, has an absolutely flat and smooth table, the fence is very nicely done, and the router lifter is definitely the cat's meow.  I've only used it on a few test pieces so far, but worked beautifully on those... 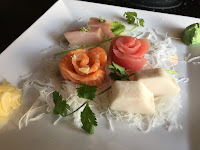 Yesterday afternoon we went out to celebrate two things: me finishing the router table (what a kit that was!) and Debbie doing her first day of good exercise since her most recent surgery.  Debbie had a small beer and a noodle dish she managed to eat entirely.  There was a lot of happy noises and smiles from her side of the table.  I had the sashimi at right (hamachi, sake, maguro, and white "tuna" (escolar).  All delicious!  I also had a rainbow roll with the same four fish.  I am so glad we found out about sushi at Black Pearl, as it's by far the best in our area (at least, the best of all those I've discovered!).
Posted by Unknown at (permalink) 10:12 AM